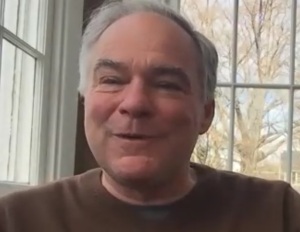 Sen. Tim Kaine (D-VA) spoke with Norfolk State students on a Zoom call about racial health disparities in Virginia and the nation on Feb. 17, 2021. (Photo from Zoom call screen capture)

A link to the entire Zoom event is provided at the end of this article.

The theme of the month is “The Black Family,” and Sen. Kaine is preparing to reintroduce a bill that will benefit Black families and people of color across the country. Sen. Kaine discussed the bill, titled the Medicare-X Choice Act, and answered questions from students concerning health disparities and healthcare issues facing their communities today.

Sen. Kaine opened up about his experience during the global pandemic, contracting the virus himself, experiencing the COVID-related deaths of those close to him, as well as seeing financial instabilities in his immediate family as a result of COVID-19. However, he emphasized that the pandemic has not affected him in the same way that it has affected others, and that the nation’s struggle with COVID-19 has exposed wildly disproportionate health disparities in the Black community.

The Medicare-X Choice Act was first introduced in 2019, but the effects of the pandemic prompted Sen. Kaine to join Sen. Michael Bennet (D-CO) in reintroducing the potential bill to Congress. The act would create access to public Medicare Exchange plans for U.S. Citizens, and provide low-cost insurance to benefit families and small businesses.

Sen. Kaine discussed the lack of health insurance coverage among African American families and individuals, and explained his hopes for the Medicare-X Choice Act to decrease the level of uninsured, and increase diversity and competition between health insurance providers.

Sen. Kaine also discussed the disparities in maternal mortality rates, and how they have grown to disproportionately high levels among the Black and Latino communities. He proposed diversifying the healthcare field by offering partnerships between health organizations and historically Black colleges and universities. He explained that increasing diversity in healthcare would increase understanding and relationships between patients of all races and their healthcare providers.

The virtual event was concluded with a live question and answer session that was facilitated by NSU students Symone Thomas and Maleik Watkins. Sen. Kaine encouraged the students attending the event and emphasized the importance of the role they play in policymaking. He assured the students of Norfolk State University that policymakers such as himself rely on their involvement in order to benefit the nation.

The Spartan Echo invites you click the link below and use the provided password to watch the entire Zoom call courtesy of the Norfolk State University Center for African American Public Policy and NSU’s Department of Political Science.