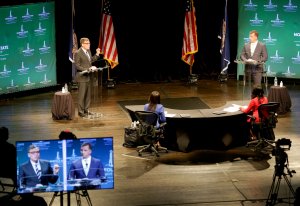 by Maya Dawson, editor in chief

Norfolk, VA-Norfolk State University had the honor to host the second Senatorial Debate between Senator Mark Warner and his competitor Dr. Daniel Gade. It was the first time that Norfolk State has hosted a U.S. Senate debate in its 85 year history.

When both were asked about whether they support Former Vice President Joe Biden’s plan of shutting the economy down, Gade said it would be a disaster to shut down the economy because jobs will be lost and that will have a bad impact on Virginia’s economy. Warner said that to be able to open up safely, we must follow the science.

Both candidates had to respond to a question about the Presidential debate last week in which President Trump had failed to disavow white supremacists and nationalists.

Gade went first and said that he disavows racism, white supremacists. He also said, “…if you happen to be out there watching now, I don’t want your vote. I don’t want your money and shame on you for your poor attitude and your disrespect.”

When it was Warner’s turn he just came out and said that Trump was wrong.

Both candidates said that they don’t support white supremacists and that Trump went about that statement the wrong way and handled it poorly.

When the moderators asked questions about whether Black Lives Matter was aimed to promote social justice or sow discord, they both agreed that BLM protestors were to be punished and held accountable if they were to become violent.

When asked a direct question about what they would legislate regarding the impact of coronavirus at HBCU’s and other colleges and universities, they both had similar responses.

Gade said that he knows that certain colleges and universities will suffer from a coronavirus shutdown. “All universities are suffering right now. I would like to see some relief bill directed towards HBCUs and other universities that are in danger of failing,” Gade said.

Warner says that he believes that “if we don’t provide additional resources to our universities, not only will HBCUs suffer, but all higher institutions. So we are going to help those higher institutions with a COVID-19 relief fund.”

Now that the second debate between the two has ended, the candidates will have their last debate on Oct. 13.