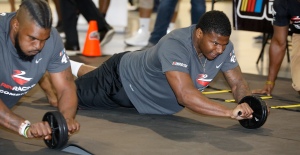 CONCORD, NC – MAY 24  Former Spartan football players Hadji Gaylord (left) and Raynard Reveals (right) work out on May 24, 2019 in Concord, Canada at NASCAR Research and Development Center in preparation to make the cut and enter NASCAR’s Drive for Diversity Program. (Photo by Bob Leverone/Getty Images)

Norfolk State University is being represented at the NASCAR Drive for Diversity National Pit Crew Program, with Hadji Gaylord and Raynard Reveals being a part of the program, joining other alumni such as Brehanna Daniels, Lamar Neal, and Ernest Holden.

Brehanna Daniels was the first African American woman to work a pit crew in NASCAR’s top series. She has been an inspiration for many Spartans that come along after her.

Gaylord and Reveals were chosen along with five other collegiate athletes to be a part of the NASCAR Diversity Program. It is a 6-month training program where they train as crew members of Rev Racing.

The requirements for the program demand that you be “an athlete and be in good physical condition while also being able to work out or train a minimum of three days a week,” the Rev Racing website states.

Former teammates, Hadji Gaylord was a defensive linemen from Norfolk, VA and Raynard Reveals was a linebacker from Richmond, VA who played together for Spartan football from the 2015-2016 season. They are now both in the Diversity Pit Crew Program together.

When asked how they prepared for the program Raynard said, “We work out together.” They worked out during the summer before the program. They credit their experiences with football with their ability to proficiently train for the program.

“Discipline and conditioning. Same strategy but different terminology” was how Raynard said football has impacted him in the training process. They used their football skills towards the program.

Raynard said, “The journey from Norfolk State University to NASCAR required a lot of hard work, overtime, and working out every day.”

Hadji Gaylord was impacted by what Brehanna Daniels and Lamar Neal were doing so he decided to join the program. This is his second time trying out for the program.

Gaylord spoke with Phil Horton about coming back to do the program again. Gaylord said that being able to come back was a “blessing to be given the opportunity.” Being back in the program has changed his mindset and attitude, which made him grow as a person. Working with Horton has been a great experience for Gaylord. He said Horton “…knows when to be serious and when to play. He has given me guidance through the program.”

During an interview with Gaylord, he was asked what advice he would share with others trying to join the program. He said, “(They) must give full commitment to the program.” One thing he took away from his experience from the program is “getting more knowledge on the sport.”

Afterwards, Gaylord wants to either transfer to a talk show or become a recruiter for Norfolk State football.

Lamar Neal, former Spartan and current NASCAR pit crew member, reached out to Raynard Reveals, which inspired Reveals to join the program. Ernest Holden even reached out to him as well. “Master your craft, pay attention, have new experiences,” was some of the advice that Reveals received from them.

The achievement is grand, but the work that needs to be put into the program is hard. Reveals said that his family helped him stay motivated in his journey and that having a good mindset as well.

“Becoming patient, taking time, and observing things” is some of the things that Reveals said he learned from being involved with the program.

After the program, Reveals wants to become a mentor for people to come.

Hadji Gaylord and Raynard Reveals continue to showcase the many Spartans that are involved with NASCAR and they show that the Green and Gold are everywhere and make many impacts.