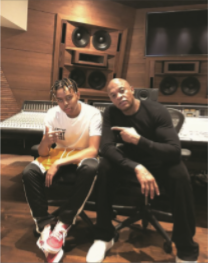 Hip-hop has long been home to a generationally charged musical divide. Yet, newcomer YBN Cordae seems to be making a favorable impression among his followers. The Maryland rapper made his way into the industry by joining the burgeoning YBN collective, alongside fellow rappers YBN Almighty Jay and YBN Nahmir.

Cordae’s visibility in the mainstream rap scene came once he released a response track to J Cole’s track “1985” earlier this year. Despite bearing an appearance similar to many of his new wave contemporaries, Cordae’s skills are distinguished enough to attract more traditional rap fans without sacrificing his youthful energy and modern style.

Between tracks such as “Kung Fu” or “ Fighting Temptations,” Cordae flexes his ability to adeptly rhyme over beats that range from vintage to new-school. On his most recent track, “Target,” YB exposes a knack for storytelling – an art seldom practiced in mainstream rap. He lyrically illustrates an encounter with a policeman who targets the rapper on the road.

His incorporation of writing techniques pioneered decades ago doesn’t come as a surprise, given his apparent knowledge of golden age hip-hop. In an interview with Hard Knock TV, Cordae discussed how his interest in the art form is rooted in his research of early hip hop.

“You know the YouTube recommended section, you can get lost in there, so; that’s how Big L popped up, Kool G Rap popped up, Jedi Mind tricks even,” he said. “That’s when I really fell in love with hip-hop. Then Kanye is coming out, then fast forward then you have Kendrick Lamar today, Logic.”

Gearing up for a solo record, Cordae has been busy working with renowned Compton producer and rapper Dr. Dre. Dre is known for cosigning and mentoring talented on-the-rise rappers. According to Cordae’s Instagram, the two spent 16 hours in the studio recently, and the experience inspired him.

“I love working with him because it’s like going through basketball drills. I felt myself getting better by the hour. [Dr.Dre’s] working with me on this solo project. That’s a mentor of mine,” Cordae was quoted as saying in Billboard.
It’s early in his career, yet Cordae has been rolling with the momentum and doesn’t appear to have any plans of slowing down.