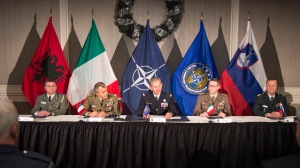 “The rapidly changing, complex security environment, will continue to be the main driver for NATO’s adaptation efforts,” said General Denis Mercier in his introduction to NATO ACT’s annual Chiefs of Transformation Conference in Norfolk, Virginia on Dec. 12-14 at the downtown Norfolk Marriott hotel.

“The future is not old military men, it’s millennials. If you don’t understand millennials, then we can’t understand how to change or how to make decisions. They’re less secure, they’re less resilient, they’re less independent, and they’re less social,” said Jay Paxton, Deputy of Strategic Communications for NATO ACT. “On the bright side, they’re very bright, highly educated, they want more access to information and they rely on technology a lot more than we do. So, when we look at who makes decisions in the process, we need to involve our subordinates.”

The next speaker, Air Marshal Sir Graham Stacey, urged reporters that despite how some may label NATO as warmongers its main goal is about “preserving unity and how to maintain cohesion.” The Air Marshall also spoke of NATO’s ideals of preventing future conflict.

“If you want to prevent war, you have to be ready to engage in it,” Sir Stacey said.

Lastly, Admiral Manfred Neilson spoke on what NATO stands for worldwide and its diplomatic relationship with Russia and other adversary nations. Admiral Neilson suggested a severity of conditions that could lead to war. However, Admiral Neilson alluded to the fact that “this isn’t the Cold War” and that NATO is focusing on other priorities, rather than preparing for war.