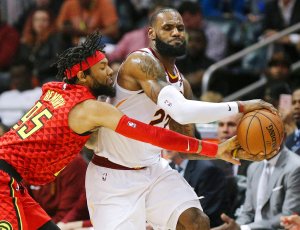 ATLANTA (AP) — LeBron James had yet another double-double, took command of a challenging defensive assignment and stuck around to see the end of the Cleveland Cavaliers’ 10th straight victory, 121-114 over the Atlanta Hawks on Thursday night.

James had 24 points and 12 assists, and Kevin Love had 25 points and 16 rebounds to help Cleveland hold off Atlanta to extend the NBA’s longest active winning streak. It was James’ 14th double-double in 22 games.

James had frequent exchanges with the officials but avoided serious confrontations following his first ejection in 1,082 career games Tuesday night in a home victory over Miami.

The Cavaliers ended a streak of three straight losses in the series.

BOSTON (AP) — Kyrie Irving scored 36 points and Boston held off weary and short-handed Philadelphia to improve their NBA-best record to 19-4.

Irving has five games this season with 30 or more points. Al Horford added 21 points and eight rebounds, and Marcus Morris had 17 points to help Boston rebound from a home loss Monday night to Detroit.

Boston led by five at the end of the third quarter but started the fourth by connecting on seven of its first 11 shots to increase the margin to 95-82.

It was the third game in four nights for the 76ers, who have lost two of three.

DENVER (AP) — Will Barton capped a career-high 37 points with a driving layup with 3.2 seconds left and Denver overcame the loss of Nikola Jokic to beat Chicago.

Gary Harris added 21 points, and Kenneth Faried had 14 points and 13 rebounds for Denver.

Jokic went down in with 44 seconds left in the second quarter when he drove to the basket and stepped on Jerian Grant’s foot. Jokic hit two free throws before heading to the locker room with an obvious limp. He didn’t return in the second half.

Lauri Markanen and Robin Lopez had 20 points each for Chicago. The Bulls have lost seven straight to finish 2-13 in November and drop to 3-17 overall.

LOS ANGELES (AP) — Utah had seven players score in double figures and went on a 21-4 run in the fourth quarter.

Austin Rivers led the Clippers with 25 points, and Lou Williams had 20.

The Clippers trailed 94-93 early in the fourth quarter before Utah took command. The Jazz outscored the Clippers 32-20 in the final period.