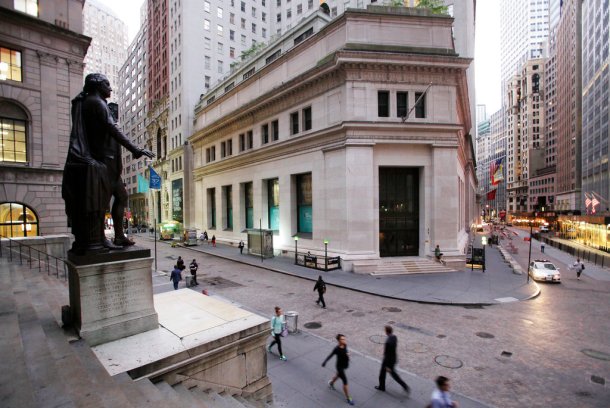 FILE – In this Oct. 8, 2014, file photo, people walk to work on Wall Street beneath a statue of George Washington, in New York. U.S. stocks are opening higher Tuesday, Nov. 21, 2017, as most industries, including technology and health care companies, start the day with solid gains. (AP Photo/Mark Lennihan, File)

HEART BEAT: Medical device company Medtronic jumped after it posted profit that was larger than analysts had expected. The company said sales of heart devices including newer devices like its CoreValve Evolut Pro heart valve, drove its sales higher in the fiscal second quarter. The stock rose $3.89, or 4.9 percent, to $82.79.

TARNISHED: Signet Jewelers plunged $21.74, or 28.7 percent, to $54.10 after the company slashed its annual forecast. The company recently sold its highest-quality loans to Alliance Data Systems, but the company said “disruptions” related to that move have affected sales, especially for its Kay brand.

BUILDING UP: Construction and technical services company Jacobs Engineering had a stronger fourth quarter than analysts expected. Its shares added $5.632, or 9.5 percent, to $64.97.

THEY DO LIKE SPAM: Food maker Hormel climbed after its quarterly profit and sales came out ahead of Wall Street projections. So did the company’s forecasts for the rest of the year. The stock climbed $1.09, or 3.3 percent, to $34.49.

NUTS TO SOUP: Campbell Soup’s profit and sales both fell a bit short of analysts’ forecasts. The company reported a 9 percent drop in soup revenue and said carrot costs increased. It also faced greater logistics costs in the aftermath of the hurricanes. The stock shed $4.03, or 8.1 percent, to $45.90.

ENERGY: Benchmark U.S. crude oil climbed 18 cents to $56.60 a barrel in New York, while Brent crude, the international standard, added 1 cent to $62.23 a barrel in London.

AP Markets Writer Marley Jay can be reached at http://twitter.com/MarleyJayAP His work can be found at https://apnews.com/search/marley%20jayt