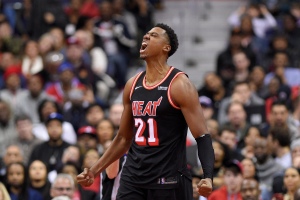 Miami Heat center Hassan Whiteside (21) reacts during the second half of an NBA basketball game against the Washington Wizards, Friday, Nov. 17, 2017, in Washington. (AP Photo/Nick Wass)

WASHINGTON (AP) — For all the good Erik Spoelstra saw from his Miami Heat at the defensive end — building a 25-point edge, holding the Washington Wizards to 29 for a half, shutting out a hobbling John Wall until there were 5½ minutes left in the game — they still barely held on for a victory.

“It was pretty harrowing,” the coach said.

The Heat let their lead dwindle all the way down to one before holding on for a 91-88 victory over the Wizards on Friday night, led by Hassan Whiteside’s 22 points and 16 rebounds and one very key 3-pointer with under a minute to go from an ill Dion Waiters.

“We probably won’t be one of those teams that’s scoring 130, 140 when you look at the scores at night,” Spoelstra said, “but we can be a team that can make it very tough on you defensively.”

James Johnson scored 20 points for Miami, and Waiters had 13, most importantly the late shot from behind the arc that made it 89-83.

“You know what time it is around that time. You know I want them shots,” said Waiters, who explained that he needed IV fluids before the game. “When you’ve got all the trust in the world from your teammates it makes the shot easier. Make or miss, you got to live with it.”

That was how Washington’s Bradley Beal felt.

He answered Waiters with a 3 of his own, then had a chance to win the game or tie it, holding the ball as Washington trailed 90-88 in the closing seconds. Beal appeared to have an open 3, but he instead took a 17-footer that missed.

“I will have another opportunity to be able to be in that situation again,” Beal added. “It will be a different result.”

The Wizards entered with a four-game winning streak, including a victory at Miami on Wednesday night. But they go as Wall goes, and the All-Star point guard wound up with only eight points on 3-for-12 shooting.

He said his left knee was sore, and he was limping in the locker room afterward. Wall wasn’t 100 percent certain he’ll be able to play in Washington’s next game.

“I could barely move out there. I couldn’t get the team going,” Wall said. “That kind of hurt us.”

Overall, the Wizards made 38.1 percent of their field-goal attempts. Still, the hosts got within 89-88 on a pair of free throws by Otto Porter Jr.

Johnson then made one foul shot with 6.5 seconds left. After Beal’s miss, Miami tacked on a free throw.

Washington entered Friday averaging 110.7 points, fourth-best in the 30-team NBA, but this one was different right from the get-go.

The Heat led 26-17 after the first quarter, when Washington made only 6 of 20 field-goal attempts, including 0 for 6 on 3s. The go-go attack steered by Wall was outscored 9-0 by Miami on fast breaks in that period, when Wall, Beal and Porter combined to shoot 0 for 8.

In contrast, that trio provided 65 points and 24 rebounds in Washington’s victory at Miami the other night.

This time, Wall said of the Heat, “They slapped us in the face in the first half.”

Wizards: Still have not defeated the same opponent in consecutive games in nearly four full years; the last time was Dec. 28-30, 2013, against the Detroit Pistons.

Other than his important 3, Waiters shot only 3 for 12, including 2 for 7 from beyond the arc. He said there was a 50-50 chance he wasn’t going to play, but “I had to keep my big boy pants on and tough it out.”

Wizards: Open a three-game road trip at Toronto on Sunday.