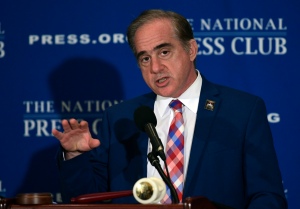 WASHINGTON (AP) — As part of its effort to expand private health care, the Department of Veterans Affairs is exploring the possibility of merging its health system with the Pentagon’s, a cost-saving measure that veterans groups say could threaten the viability of VA hospitals and clinics.

VA spokesman Curt Cashour called the plan a potential “game-changer” that would “provide better care for veterans at a lower cost to taxpayers,” but he provided no specific details.

Griffin Anderson, a spokesman for the Democrats on the House Veterans Affairs Committee, said the proposal — developed without input from Congress — would amount to a merger of the VA’s Choice and the military’s TRICARE private health care programs. Committee Democrats independently confirmed the discussions involved TRICARE.

News of the plan stirred alarm from veterans groups, who said they had not been consulted, and sharp criticism from congressional Democrats who pledged to oppose any VA privatization effort that forces veterans “to pay out of pocket for the benefits they have earned with their heroism.” VA is seeking a long-term legislative fix for Choice by year’s end.

“Today, we see evidence that the Trump administration is quietly planning to dismantle veterans’ health care,” said House Minority Leader Nancy Pelosi, D-Calif. “House Democrats will fight tooth and nail against any efforts to diminish or destroy VA’s irreplaceable role as the chief coordinator, advocate and manager of care for veterans.”

TRICARE is insurance that is paid by the government, but uses private doctors and hospitals. The VA provides most of its care via medical centers and clinics owned and run by the federal government, though veterans can also see private doctors through VA’s Choice program with referrals by VA if appointments aren’t readily available.

“My overarching concern is these are very dramatic changes in the way health care is delivered to veterans,” said Carrie Farmer, a senior policy researcher on military care at Rand Corp., who has conducted wide-ranging research for VA. “There haven’t been studies on what the consequences are in terms of both costs and quality of care.”

Navy Commander Sarah Higgins, a Pentagon spokeswoman, confirmed it was exploring with VA “many possible opportunities to strengthen and streamline the health of our service members and veterans.” She declined to comment on specifics “unless and until there is something to announce.”

In its statement to The Associated Press, Cashour explained that VA Secretary David Shulkin was working with the White House and the Pentagon to explore “the general concept” of integrating VA and Pentagon health care, building upon an already planned merger of electronic health care records between VA and the Pentagon. Because Shulkin has said an overhaul of VA’s electronic medical records won’t be completed for another seven to eight years, an effort such as a TRICARE merger likely couldn’t happen before then.

“This is part of the president’s efforts to transform how government works and is precisely the type of businesslike, commonsense approach that rarely exists in Washington,” Cashour said.

At least four of the nation’s largest veterans’ organizations — The American Legion, Veterans of Foreign Wars, AMVETS and Disabled American Veterans — called a TRICARE merger a likely “non-starter” if it sought to transform VA care into an insurance plan.

“VA is a health care provider and the VFW would oppose any effort to erode the system specifically created to serve the health care needs of our nation’s veterans by reducing VA’s role to a payer of care for veterans,” said Bob Wallace, executive director of VFW’s Washington office.

Louis Celli, director of veterans’ affairs and rehabilitation for The American Legion, said any attempts to outsource services away from VA medical centers and clinics would be financially unsustainable and likely shift costs unfairly onto veterans with service-connected disabilities.

He noted something similar occurred with TRICARE — military retirees were promised free care from military base hospitals. But then TRICARE began offering insurance to use private-sector care, and TRICARE beneficiary co-pays are now rising. “The precedent the TRICARE model sets is not something we would accept on the VA side,” Celli said.

During the 2016 campaign, President Donald Trump pledged to fix VA by expanding access to private doctors. In July, he promised to triple the number of veterans “seeing the doctor of their choice.” More than 30 percent of VA appointments are made in the private sector.

Some groups have drawn political battle lines, with the left-leaning VoteVets and the American Federation of Government Employees warning of privatization, and Concerned Veterans for America, backed by the billionaire conservative Koch brothers, pledging a well-funded campaign to give veterans wide freedom to see private doctors.

Rep. Tim Walz of Minnesota, the top Democrat on the House Veterans Affairs Committee, called for an immediate public explanation “without delay” for the quiet discussions to integrate TRICARE with VA’s Choice.

“The fact that the Trump administration has been having these secret conversations behind the backs of Congress and our nation’s veterans is absolutely unacceptable,” said Walz, the highest-ranking enlisted service member to serve in Congress.

A spokeswoman for Rep. Phil Roe of Tennessee, the Republican chairman of the House committee, said he planned to proceed with his bipartisan legislative plan to fix Choice without integrating TRICARE.