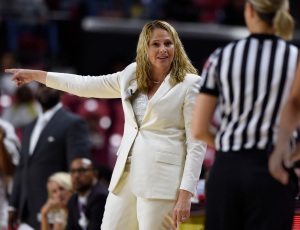 COLLEGE PARK, Md. (AP) — Personal glory doesn’t really excite A’ja Wilson all that much. The South Carolina senior is all about winning, especially after experiencing the thrill of claiming the NCAA championship last season.

Thus, after scoring a career-high 32 points in a 94-86 victory over No. 15 Maryland on Monday night, Wilson declared: “The biggest thing was we got a good road win. That was the goal.”

After withstanding a late charge, by the scrappy Terrapins, No. 4 South Carolina had a victory to savor.

“I don’t know if it’s a statement win, but it’s a great win,” coach Dawn Staley said. “The reason why we set this game up so early is we wanted to test ourselves.”

The fourth-ranked Gamecocks (2-0) let a 26-point lead dwindle to 87-84 before Tyasha Harris made a three-point play with 23 seconds left to clinch it.

“We just kind of got tired,” Wilson acknowledged.

South Carolina has only two returning starters from last season’s squad, but one of them is Wilson — and that appears to plenty good enough. The 6-foot-5 forward had 18 points by halftime and finished with 12 rebounds for her 32nd career double-double.

“Obviously, A’ja Wilson is a woman among girls,” Maryland coach Brenda Frese said. “She should be in the pros. She’s just that talented.”

Wilson went 10 for 19 from the field and made 12 of 18 free throws. Her previous career high was 31 points, against Texas last December.

With only two seniors on a roster depleted by graduation and transfers, Maryland didn’t have the talent, height or depth to hang with the Gamecocks.

But the Terp made it close.

“A great experience for our young team to be able to go through,” Frese said. “We’ve got to build on it and make it a 40-minute game.”

The Gamecocks stretched their lead to 71-45 in the third quarter.

Limited to four points on 1-for-4 shooting in the first half, Charles scored 27 after halftime and finished 14 for 15 at the foul line.

“A lot of players might have folded after having only four points in the first half, but she just put her head down and fought and showed what makes her so special,” Frese said.

Wilson was the star, but this wasn’t a one-woman show.

“We grew up. We had other people contribute besides A’ja Wilson,” Staley said. “That’s what we need to do and work on all year long.”

South Carolina: If this was supposed to serve as an early-season test for the defending champions, the Gamecocks get a solid “B.” South Carolina looked superb for three quarters, and now it has to learn how to finish. The Gamecocks were outscored 32-21 in the fourth quarter and missed four FTs in the last two minutes.

“There were some very good things that happened in this game and some things we need to improve on,” Staley said.

Maryland: The Terps may get better as time goes on, and they just might be able to make another run at the conference championship. For three quarters, they were outclassed. But they never quit, a quality that usually rings true for a team coached by Frese.

“I loved the fight of our team,” Frese said.