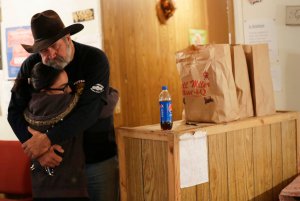 Rod Green, right, hugs a friend at By His Grace, a food pantry affiliated with Sutherland Springs Baptist Church, Friday, Nov. 10, 2017, in Sutherland Springs, Texas. Green wanted to open the food pantry, which is located next to the church, despite the recent shooting at the small South Texas community where more than two dozen were killed. (AP Photo/Eric Gay)

SUTHERLAND SPRINGS, Texas (AP) — The reopening of a food pantry offered this stricken Texas community another chance to mourn Friday as the charity resumed its weekly operations five days after more than two dozen people were killed at the church next door.

People crowded inside the By His Grace pantry, tearfully hugging and filling bags with donated bakery goods, groceries and used clothing.

The pantry’s director, Lula White, was among those killed in the shooting Sunday at First Baptist Church. White was also the 71-year-old grandmother of the gunman’s wife.

As 68-year-old Brandy Johnson walked in, she flinched and she said she could “see Lu at the desk.” White “had a heart as big as Texas,” she said.

Judy Green, along with her husband, Rod, have operated the pantry for 11 years. She said she has slept little since Sunday, waking up screaming from nightmares. The couple, who were married at the church, were not at the service Sunday but later watched as worshippers were carried out in body bags.

Deana Cassel, who is 52 and a lung cancer patient, wiped away tears as she helped straighten piles of used clothing. She said volunteering at the pantry had given her a sense of purpose and a way to channel her grief about losing friends in the shooting.

“There’s a lot of poverty in this area, but people don’t only come here for something to eat. These people make them think they have someone in their life,” she said, gesturing toward the Greens.

Law enforcement officials have reopened the intersection where the First Baptist Church stands, but black mesh material was tied to the chain-link fence surrounding it. With the bullet-ridden church door open, a tall wooden cross could be seen at the altar.

At annual Veterans Day observances Saturday, the church victims with military backgrounds will receive a full military salute on the grounds of the community hall, said Alice Garcia, president of the unincorporated town’s community association.

“Everyone in the community is doing what they can, but honestly everyone feels so helpless,” 20-year-old Karyssa Calbert of neighboring Floresville, Texas, said at the hall.

Before the church is demolished, it will serve as a temporary memorial, said Rod Green, who also serves as the grounds steward for the church.

The building will be scrubbed down and white-washed, and chairs will be placed inside — one to commemorate each of the dead.

Green said services will never take place there again. He said the church plans to build a new structure on property it owns elsewhere. Services will be held Sunday at the community hall.

Pastor Frank Pomeroy told leaders of the Southern Baptist Convention earlier this week that it would be too painful to continue using First Baptist Church as a place of worship.

Other sites of mass shootings have been torn down, including Sandy Hook Elementary in Newtown, Connecticut, where a gunman killed 20 children and six adults in December 2012. A new school was built elsewhere.

A one-room Amish schoolhouse near Lancaster, Pennsylvania, was torn down in 2006, 10 days after an assailant took children hostage and shot and killed five girls ages 6 to 13. The previous site of the school is now a pasture. A nearly identical schoolhouse with a security fence was erected nearby and named New Hope School.

Devin Patrick Kelley shot and killed 25 people at the church. Authorities have put the official toll at 26, because one of the victims was pregnant.

Kelley died from a self-inflicted gunshot wound after being shot and chased by two residents when he was leaving the church, authorities said.

Meanwhile, funerals have started. On Thursday, more than 500 people attended a private service at a San Antonio-area Air Force base for Scott and Karen Marshall, a husband and wife who both served in the military, said Randy Martin, spokesman for the 12th Flying Training Wing.

Eleven people remained hospitalized Friday with wounds from the shooting.