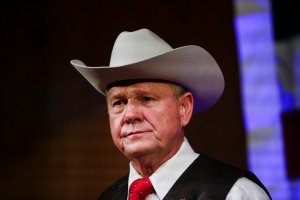 FILE – In this Monday, Sept. 25, 2017, file photo, former Alabama Chief Justice and U.S. Senate candidate Roy Moore speaks at a rally, in Fairhope, Ala. According to a Washington Post story Nov. 9, an Alabama woman said Moore made inappropriate advances and had sexual contact with her when she was 14. (AP Photo/Brynn Anderson, File)

WASHINGTON (AP) — The Latest on Roy Moore, the GOP nominee for the Senate in Alabama (all times local):

Merrill said Friday that if the party chose to disqualify Moore, it was too late to remove him from the ballot.

The revelations triggered a sharp backlash from would-be Republican colleagues on Capitol Hill, who called on Moore to quit the race if the allegations were true.

Paul Reynolds tells The Associated Press: “This is a firestorm designed to shipwreck a campaign in Alabama. I think it’s sinister.”

Reynolds says the timing of the allegations in a report from The Washington Post is too coincidental, with only a month left in the campaign.

Reynolds supports Moore and says if the candidate steps down now, that would mean surrendering to Democrat Doug Jones.

Reynolds says, “This is a deliberate effort to discourage the campaign from being able to put together the team it needs to carry forward.”

The National Republican Senatorial Committee is ending its fundraising agreement with Alabama Senate candidate Roy Moore in light of allegations of sexual contact with a teenager decades ago.

The group had been part of a fundraising committee that includes the Alabama Republican Party and the Republican National Committee. The information was in a filing to the Federal Election Commission on Friday.

The step comes as Senate Republicans, led by Majority Leader Mitch McConnell, have called on Moore to step aside in the Alabama Senate race if the allegations are true.

Sen. Cory Gardner of Colorado is chairman of the NRSC, the campaign arm of the Senate GOP.

Moore has been defiant, insisting he would not quit the race for the Dec. 12 special election for Attorney General Jeff Sessions’ former seat.

Republicans are not supposed to worry about Alabama.

But in the span of a tumultuous afternoon on Thursday, a low-profile special election became a Republican nightmare that threatens a once-safe Senate seat. And it offers a new window into ugly divisions that continue to plague the GOP in the age of President Donald Trump.

Republican Senate candidate Roy Moore is denying allegations of decades-old sexual misconduct with minors published Thursday in a Washington Post story. The revelations come a month before the Dec. 12 special election, and they’re triggering a backlash from would-be Republican colleagues on Capitol Hill, who are calling on the 70-year-old conservative Christian to quit the race if the allegations are true.

It’s a bittersweet moment for some Republicans who thought Moore never should have been the party’s nominee.