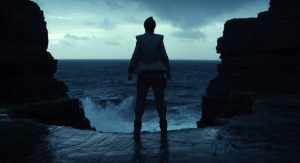 FILE – This file image provided by Lucasfilm shows a scene from the upcoming “Star Wars: The Last Jedi,” expected in theaters in December. Disney’s $4 billion deal for Lucasfilm and “Star Wars” just keeps getting better for the House of Mouse. The company is banking on the latest installments, “The Last Jedi” in December 2017 and a Han Solo movie in May 2018, to drive people to theaters. But that’s far from the end of the money-making opportunities. (Industrial Light & Magic/Lucasfilm via AP, File)

NEW YORK (AP) — Disney’s $4 billion deal for Lucasfilm and “Star Wars” just keeps getting better for the House of Mouse.

The company is banking on the latest installments, “The Last Jedi” in December and a Han Solo movie in May, to drive people to theaters. But that’s far from the end of money-making opportunities from Han Solo, R2-D2, Kylo Ren and Rey. In fact, CEO Bob Iger said Thursday that the company is now planning a brand-new “Star Wars” trilogy, which will be the fourth in the franchise.

Disney has drawn big profits from the strengths of its TV channels — namely ESPN — but that growth is challenged as more people dump cable subscriptions. As people turn to online replacements such as Netflix, Disney is hoping to lure them with a streaming service planned for 2019. “Star Wars” movies will be a big part of that; so will a new “Star Wars” series Iger also announced Thursday.

Disney also wants to squeeze cash from “Star Wars” fans in the forms of toys and, theme park visits and hotel stays.

“Star Wars: The Force Awakens,” released in December 2015, pulled in more than $2 billion in worldwide ticket sales, trailing only “Avatar” and “Titanic” as the best-selling theatrical release ever (without adjusting for inflation). It also bumped up home entertainment revenue from DVD sales. “Rogue One,” last year’s installment, made over $1 billion in global box-office revenue.

“The Last Jedi” will continue from where “Force” left off. Michael Nathanson of MoffettNathanson has a “somewhat conservative” estimate of $1.9 billion in box-office haul for the film. He also expects the latest “Avengers” installment to bring in $1.3 billion.

Big-budget, sequel-generating movies deliver big wins for studios. In fiscal 2016, when Disney released “The Force Awakens,” the studio’s profit was $2.7 billion. That’s expected to fall this year and jump back up to $2.84 billion in 2018, thanks to “The Last Jedi” and several Marvel movies.

Disney is funneling its movie hits to other parts of its sprawling empire to help it make money repeatedly from its intellectual property.

For example, “Star Wars”-themed areas at Disneyland in California and Disney’s Hollywood Studios in Florida will open in 2019.

“They’re huge and I think very exciting in terms of how we’re using technology to create really interesting attractions and experiences,” Iger said at a September investment conference.

The company is also planning a “Star Wars”-themed hotel at Walt Disney World in Florida. Disney touts it as an “immersive” experience; guests will be able to dress up as their favorite characters.

Disney is making other big investments in its parks, too, as it races to catch up with Universal’s enormously popular Harry Potter-themed areas. In the latest quarter, revenue rose 6 percent to $4.67 billion, helped by the international parks. In the U.S., Hurricane Irma shut down Walt Disney World for two days, hurting domestic results.

Analysts expect merchandise revenues to get a bump in fiscal 2018; Nathanson cites the “Star Wars” and Marvel movies, as well as “Frozen” coming to Broadway, as drivers.

GEARING UP AGAINST NETFLIX

The movies will also serve as a lure for Disney’s streaming service, which will contain hundreds of movies and thousands of TV episodes and shorts. Pixar, “Star Wars” and Marvel films will be included along with Disney-brand video. Disney’s deal with Netflix is expiring and won’t be renewed, making the new service the exclusive online home for much of Disney’s prime content.

Iger said Thursday that the streaming service will cost less than Netflix at launch. Netflix’s streaming plans start at $8 a month.

Disney also plans an ESPN streaming service, which it announced Thursday will be called ESPN Plus, that will launch in spring 2018. It won’t air the same sports as its channel — but one day might. ESPN, long its cash cow, has been losing subscribers as attention shifts online.