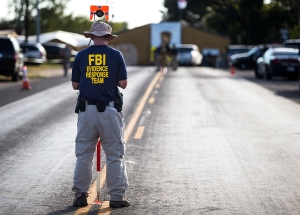 A member of the FBI’s Evidence Response Team works on the crime scene of the mass shooting at the First Baptist Church in Sutherland Springs, Texas on Monday, Nov. 6, 2017. (Nick Wagner/Austin American-Statesman via AP)

SUTHERLAND SPRINGS, Texas (AP) — The Latest on the church shooting in Texas (all times local):

A man who says he’s the uncle of the gunman who killed more than two dozen people in a Texas church is calling his nephew a “coward.”

Dave Ivey appeared in an interview Monday with North West Digital News, a YouTube channel based in Washington state. Ivey says he hadn’t seen Devin Kelley in person for years, but that he maintained contact through Facebook.

Ivey says he attempted to contact Kelley hours before the Sunday shooting after seeing a troubling Facebook post on Kelley’s page that said “he wasn’t thinking correctly and his head hurt.” Ivey says he private messaged Kelley, asking if he was OK, but didn’t hear back.

Ivey identified himself as Kelley’s uncle on Facebook and in the interview. Kelley’s mother’s maiden name is Ivey, and the survivors listed in an obituary for Kelley’s maternal grandfather include a Dave Ivey of Longview, Washington.

Authorities say that their tally of those killed in Sunday’s shooting at a Texas church includes an unborn child.

Texas Department of Public Safety officials confirmed Tuesday that their count of 26 victims included the unborn child of Crystal Holcombe, who was eight months pregnant when she and three of her children were killed at the service. Authorities had previously said the age of the victims ranged from 18 months to 77 years.

Crystal’s husband, John Holcombe, was injured in the shooting.

The inclusion of the unborn child means nine of the 26 victims killed were members of the Holcombe family.

Authorities have not officially released any names of victims, saying they were waiting for the medical examiner to confirm their findings.

The Air Force says federal privacy laws prohibit it from commenting on a police report that the former airman who opened fire at a Texas church had escaped from a New Mexico mental health facility in 2012.

Air Force spokeswoman Ann Stefanek cited privacy regulations under the Health Insurance Portability and Accountability Act of 1996, which she said apply even though the former airman, Devin P. Kelley, died after the church attack, apparently from a self-inflicted gunshot.

An El Paso, Texas, police report also says that Kelley made death threats against superior officers. Stefanek said the Air Force was looking into that report.

Megan Posey with Connally Memorial Medical Center in Floresville, about 10 miles from Sutherland Springs, reported one patient Tuesday was in stable condition.

Authorities say the gunman fatally shot himself following a chase.

A 2012 police report says that the Texas church gunman had made death threats against his military superiors and had been caught trying to sneak firearms onto an Air Force base in New Mexico where he had been stationed.

The information was contained in a police incident report after Devin Kelley briefly escaped in June 2012 from a mental health facility in New Mexico where he had been committed. KVIA television in El Paso first reported about the escape. It was also reported by KPRC.

Police in El Paso, Texas, where Kelley was caught after the escape, said in the report that an official of the mental health facility told them that Kelley “was a danger to himself and others.”

The report says that Kelley had already been caught sneaking firearms onto Holloman Air Force base. It also says that he “was attempting to carry out death threats that (Kelley) had made on his military chain of command.”

This version of the Latest corrects the 1:35 p.m. item to say that KVIA-TV in El Paso was the first to report about the escape, not KPRC.

The gunman who attacked worshippers at a Texas church, killing 26, was in a mental health facility in New Mexico and briefly escaped in 2012.

An El Paso, Texas, police incident report says Devin Patrick Kelley was stationed at Holloman Air Force Base when he was caught trying to bring firearms onto the base.

The report obtained by KPRC-TV in Houston also says Kelley, 21 at the time, had made death threats against superior officers.

He was committed to a mental health facility in Santa Teresa, New Mexico, but at some point escaped and was later found by police at a bus station in downtown El Paso in June 2012.

Investigators say the FBI is trying to get into the cellphone that belonged to the man who fatally shot 26 people inside a small Texas church.

Christopher Combs is the special agent in charge of the FBI’s San Antonio division. He said during a news conference Tuesday that the phone was flown to an FBI lab for analysis, but that agents have yet to access it. Combs declined to release the make or model of the phone.

Combs was joined by other law enforcement officers who are investigating the Sunday shooting at the First Baptist Church in the tiny town of Sutherland Springs. The rampage also wounded about 20 people.

Martin says there are about 50 people in the congregation, adding that “there were very few that were here that were uninjured.”

Defense Secretary Jim Mattis says he has directed the Pentagon’s watchdog to examine the circumstances of the Air Force’s failure to report the Texas church shooter’s domestic violence conviction to the FBI.

Mattis says we have to “find out what’s going on.”

Under Pentagon rules, convictions of military personnel in crimes like assault should be shared with the FBI for its National Criminal Information Center database. Devin Patrick Kelley, the gunman in Sunday’s attack, was convicted of assault against his wife and stepson in an Air Force court-martial in 2012.

Mattis says the Pentagon must make certain it’s got “the right direction.” And he says he must “define what the problem is.”

Mattis says: “If the problem is we didn’t put something out, we’ll correct that.”

House Speaker Paul Ryan says he has questions for the Air Force about how the gunman who killed 26 people at a Texas church obtained a gun.

Devin Patrick Kelley had a history of domestic violence but was able to buy weapons because the Air Force did not submit his criminal history to the FBI as required by military rules.

Ryan on Tuesday echoed other lawmakers — Republicans and Democrats — who want to know why there was a breakdown in the system that allowed Kelley to legally purchase a weapon.

Ryan told reporters at a weekly news conference on Tuesday that he wants to know how Kelley slipped through the cracks.

Pope Francis has sent a telegram to the archbishop of San Antonio expressing his condolences for the deadly shooting at the First Baptist Church in Sutherland Springs.

The telegram was sent Tuesday by the Vatican’s secretary of state, Cardinal Pietro Parolin, who said the pope was “deeply grieved by news of the loss of life and grave injuries caused by the act of senseless violence.”

At least 26 people died in the shooting on Sunday.

The pontiff sent condolences to “the families of the victims and the wounded, to the members of the congregation and the entire local community.”

Francis also offered prayers “to console all who mourn and to grant them the spiritual strength that triumphs over violence and hatred by the power of forgiveness, hope and reconciling love.”

Officials say at least five people injured in the South Texas church shooting are still being treated at hospitals.

Two adults and two children who were hurt in the gunfire at the First Baptist Church in Sutherland Springs on Sunday are still hospitalized at the University Health System in San Antonio. Spokesman Don Finley says their conditions range from serious to critical.

Brooke Army Medical Center in San Antonio hasn’t responded to a request for details on patients being treated there.

Sutherland Springs is about 35 miles (55 kilometers) southeast of San Antonio.

A Texas couple who attended Sunday’s service where 26 worshippers were fatally shot says the gunman appeared to target babies who cried and others who screamed or made noise.

Roseanne Solis and her husband Joaquin Ramirez told KSAT-TV in San Antonio on Monday that people fell to the ground after the man sprayed gunfire from outside First Baptist Church in Sutherland Springs.

Authorities have identified the gunman as 26-year-old Devin Patrick Kelley.

Solis says there was a moment of silence before Kelley yelled, “Everybody die!” and then another round of gunfire began.

Ramirez says after entering the church, Kelley first shot those in charge of the camera and audio of the service. He then moved down the center aisle toward those on the church dais.

Solis was treated for a gunshot wound to the shoulder.

The sister of a man who attended Sunday’s service at the South Texas church where 26 were killed says her brother and his wife were among those who died in the gunfire.

Evangelina Santos told Univision on Monday that 51-year-old Richard Rodriguez and his wife Theresa died in the shooting at First Baptist Church in Sutherland Springs.

Santos says she was hoping they “were only hurt, not dead,” but authorities confirmed about 11 p.m. Sunday that her family members had died.

She says her brother was a retired railroad worker who was often the center of attention.

Kelley was shot by his pursuers and authorities say a self-inflicted gunshot wound killed him.

President Donald Trump says stricter gun control measures might have led to additional casualties during a mass shooting at a South Texas church.

Trump said at a Tuesday news conference in South Korea that, “If you did what you’re suggesting, there would have been no difference three days ago and you might not have had that very brave person who happens to have a gun or a rifle in his trunk.”

Trump says if that a neighboring good Samaritan hadn’t had a gun, “instead of having 26 dead, you would have had hundreds more dead.”

Authorities say Devin Patrick Kelley fired at least 450 rounds of ammunition at worshippers in Sunday’s attack at the First Baptist Church in Sutherland Springs. The dead ranged in age from 18 months to 77 years old.

The gunman who killed 26 people at a small town Texas church was able to buy weapons because the Air Force did not submit his criminal history to the FBI as required by military rules.

The Air Force acknowledged Monday that if the past offenses by Devin Patrick Kelley had been properly shared, they would have prevented him from buying a gun.

In 2014, Kelley was formally ousted from the Air Force for a 2012 assault on his ex-wife in which he choked her and struck her son hard enough to fracture his skull.

Authorities say Kelley fired at least 450 rounds of ammunition at worshippers in Sunday’s attack at the First Baptist Church in Sutherland Springs. The dead ranged in age from 18 months to 77 years old.