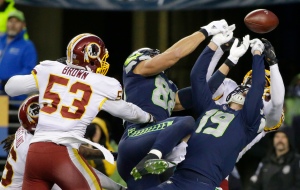 SEATTLE (AP) — Jay Gruden did what coaches rarely do in the regular season and acknowledged this Washington victory had more significance.

“This is pretty high, to be honest with you. Especially with where we are as a team,” Gruden said. “We were 3-4, it’s hard if we jump down to 3-5. We have to somehow keep pace, we can’t get too far behind or the season will leak out on us.”

The Redskins did what few teams have accomplished on Sunday, coming into Seattle and rallying in the final moments to stun the Seahawks 17-14. Washington became the first team outside the NFC West to win in Seattle since Carolina during the 2015 season, and one of three non-NFC West teams to beat the Seahawks on their home field since the start of the 2012 season.

The fact Washington won while being severely short-handed due to injuries, and pulled out the victory by bettering the Seahawks’ defense inside the final two minutes, only amplified what the Redskins accomplished. Washington was down six starters, including three offensive linemen. Kirk Cousins was hit 11 times and sacked six times by Seattle’s pass rush, yet was able to deliver two huge throws on the final drive to get Washington in position for Rob Kelley’s second 1-yard touchdown that won it.

The victory also kept Washington in the playoff discussion at the midway point of the season. The Redskins are going to be challenged to catch Philadelphia in the NFC East, especially with the Eagles already having swept the season series. But at 4-4, the Redskins have a chance to be in the wild-card race going forward.

“It shows that we can play in this league and we are just as good as anybody else,” Kelley said. “Just imagine what we can do when those guys get healthy.”

Seattle had been able to mask some of its issues during its four-game win streak, but was exposed against Washington. Penalties. Special teams problems. Inability to adequately protect Russell Wilson. They were all on display against the Redskins, and this time, the Seahawks were unable to overcome them.

Seattle was penalized 16 times, 10 on offense. Blair Walsh missed three field goal attempts. Russell Wilson threw two interceptions and the majority of his 10 rushes were done out of necessity, not design.

“He competed his tail off all day long. He was all over the place out there,” Seattle coach Pete Carroll said of Wilson. “Unfortunately, when he’d hit a couple big plays and scrambles, we would have penalties that nullified those.”

Here’s what else to know about Washington improving to 4-0 in the regular season at CenturyLink Field since 2002:

KICKING IT: Seattle believes it has a good kicker in Blair Walsh. But his three misses inside of 50 yards brought up flashbacks of his struggles in Minnesota. Walsh failed from 44, 39 and 49 yards after being 12 of 13 on the season coming into the week.

Any more struggles could heighten Seattle’s concern and perhaps accelerate the conversation whether changes should be considered.

DEFENSIVE STAND: Because of the injuries on offense, Gruden put the pressure on his defense this week to keep Washington in the game so that Cousins and the offense would have a chance. The Redskins did just that and were helped by Seattle’s penalty issues. The Seahawks went three-and-out on five of their first eight possessions, and their only points until the fourth quarter came on a safety.

“We had some moments and flashes, but we didn’t do it consistently,” Washington defensive lineman Ziggy Hood said. “Winning, it feels good, but when you know you can do better, we knew we could have done more.”

WAVE THE FLAG: Seattle saw yellow everywhere, especially when it was on offense.

Ten of Seattle’s 16 penalties came on offense. All 10 came in the first three quarters. All 10 penalties left Seattle facing double-digit yards needed to get a first down. At one point, Seattle was facing second-and-30 from the Washington 34 in the first half after offensive pass interference and holding calls docked the Seahawks 20 yards. Those two penalties loomed big as Walsh missed the second of his three field goal attempts on that drive.

INJURIES: While Washington had the larger number of injuries this week, Seattle’s may have a greater impact considering the quick turnaround. The Seahawks played without safety Earl Thomas (hamstring) and defensive tackle Sheldon Richardson (oblique), and lost running back Eddie Lacy to a groin injury in the first half. Carroll was unsure if any of the three would be ready by Thursday at Arizona.

“We won’t know, really, until right up to game time,” Carroll said.