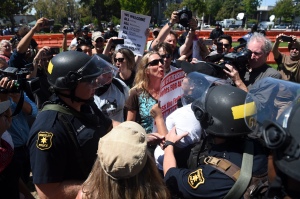 SHELBYVILLE, Tenn. (AP) — Snipers perched on rooftops. Police helicopters and drones hovered overhead. Officers in riot gear lined the streets. White nationalists and counterprotesters screamed at each other from fenced-off pens, but the tactics employed by law enforcement at the “White Lives Matter” rally last month in Tennessee might have prevented the kind of mayhem that had erupted at earlier rallies in other states.

Several weeks earlier, police in Richmond, Virginia, banned bats, bricks, flag poles and any other items that potentially could be used as weapons at a rally held by a Confederate heritage group. Police in Berkeley, California, employed similar tactics this year after a hands-off approach failed to prevent a series of violent clashes.

At the heart of the changes is a determination to prevent a repeat of the bloodshed resulting from a white nationalist rally in Charlottesville, Virginia, in August, when a woman was struck and killed by a car that plowed into a group of counterprotesters.

Since then, law enforcement agencies around the country are honing their responses to an increasing number of rallies held by far-right groups, trying to balance free-speech rights with public safety and comparing notes to see which tactics work best.

Preparing for a speech by white nationalist Richard Spencer on its campus last month, the University of Florida sent a contingent of police officers to Berkeley to learn from the city’s experiences.

“We have to be the mediator (for) people’s ability to have free speech. But … what we took away from Berkeley was to act quickly if something violent arose,” University of Florida police Chief Linda Stump-Kurnick.

Josh Bronson, training director for the International Association of Campus Law Enforcement Administrators, began developing a new training program for campus police within days of the Charlottesville violence. One of Bronson’s primary messages is that meeting with group leaders on opposing sides of the barricades — before the rallies even begin — can help police avoid violence.

“The more communication that occurs, the more positive the outcome,” he said.

At the “Unite the Right” rally in Charlottesville on Aug. 12, white nationalists and counterprotesters converged at an intersection that remained unblocked by barriers or police tape. Officers largely stood and watched as people threw punches, beat each other with clubs, set off smoke bombs and unleashed chemical spray.

The response led to reports that officials had given an explicit “stand-down” order not to intervene, something authorities have vehemently denied. Charlottesville police Chief Al Thomas said white nationalists didn’t comply with a security plan that police had devised to keep them separated from counterprotesters. Virginia’s governor and other officials defended the response, saying police had to show restraint because the crowd was heavily armed.

A consultant hired by the state to review the day’s events, however, issued a preliminary report last month that said the city “placed minimal/no restrictions on the demonstrators.” It also found that many recommendations the state made to the city ahead of the event “were not accepted.”

The police response in Richmond, Virginia, was strikingly different about a month later, when an out-of-state Confederate heritage group announced plans for a rally there in September. Virginia allows residents to openly carry guns, but Richmond police banned other items that could be used as weapons, including bats, bricks and flag poles. The department also implemented parking restrictions and road closures and used public works trucks as barricades to keep vehicles out of pedestrian areas.

Police Chief Alfred Durham said authorities had learned from Charlottesville and would quickly step in to break up any violence.

“We will not allow things to get out of hand,” Durham said before the rally, where seven people were arrested but nobody was injured.

The list of items banned from last month’s rally in Shelbyville, Tennessee, included weapons, bottles, backpacks, purses, masks, sticks and poles. A new Tennessee law enacted this year at the behest of the National Rifle Association prohibits local governments from banning people with state-issued handgun carry permits from being armed at any site that does not screen with metal detectors. To comply with that law while trying to ensure public safety, officials herded white nationalists and counterprotesters through airport-like security checkpoints staffed by an officer with a handheld metal detector.

White nationalist blogger Brad Griffin, who helped organize the rally, said the measures delayed the event’s start by more than an hour but probably prevented violence.

“I’m not going to complain,” Griffin said. “I’d much rather have to deal with that than what we did in Charlottesville.”

Only minor skirmishes were reported on the University of Florida’s Gainesville campus when Spencer spoke there last month. But three of his supporters were arrested on attempted-murder charges after an off-campus shooting later that day.

Alex Vitale, a Brooklyn College sociology professor who has studied the policing of protests for two decades, said law enforcement authorities need a “flexible, mobile response” that allows officers to prevent or quickly end clashes on the outskirts of rally sites.

“Police need to have a presence in these groups as they’re moving around,” he said.