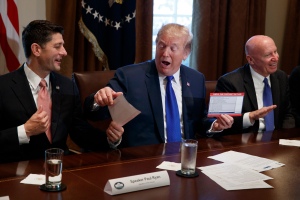 President Donald Trump holds an example of what a new tax form may look like during a meeting on tax policy with Republican lawmakers in the Cabinet Room of the White House, Thursday, Nov. 2, 2017, in Washington, with House Speaker Paul Ryan, R-Wis., and Chairman of the House Ways and Means Committee Rep. Kevin Brady, R-Texas, right. (AP Photo/Evan Vucci)

WASHINGTON (AP) — The House Republican tax bill is meant to send trillions in corporate profits overseas pouring back home and, in the process, give the U.S. economy a healthy boost.

It may be more likely to land with an economic thud and provide a windfall to tax attorneys scouring the Byzantine bill for tax breaks on behalf of corporate clients.

“Every tax lawyer in town is going to get a new car,” says Martin Sullivan, chief economist for Tax Analysts and a former U.S. Treasury Department economist.

The bill is designed to solve a vexing problem: Many big U.S. companies earn fat profits overseas. But they don’t want to return the money to the United States because they would have to pay the hefty 35 percent U.S. corporate tax. So an estimated $2.6 trillion remains stranded abroad.

“You don’t have to pay U.S. tax as long as you leave it offshore,” says Kimberly Clausing, an economist at Reed College. “But your shareholders get upset if you leave it there forever.”

Besides reducing the U.S. corporate tax rate to 20 percent, the plan would let companies repatriate their existing overseas profits at much lower rates — 12 percent for profits that have been kept in cash and 5 percent for profits from investments that are hard to sell.

“For a lot of these companies you are talking about tens of billions, or in the case of Apple, hundreds of billions of dollars,” says Scott Kessler, analyst with CFRA Research, referring to untaxed profits overseas.

Apple has more than $230 billion overseas, Microsoft $124 billion, according to the Institute on Taxation and Economic Policy.

Returning those overseas profits to America, the Republicans say, would give the economy a healthy jolt as companies put their newly available cash to work.

But critics note that a similar one-time “tax holiday” on overseas profits generated little economic oomph 13 years ago. The 2004 American Jobs Creation Act temporarily cut taxes on repatriated profits to 5.25 percent from 35 percent. About 9,700 companies were eligible for the tax break and 843 took advantage of it, bringing back $312 billion.

Fifteen companies, led by Pfizer, Merck and Hewlett-Packard, accounted for 52 percent of the repatriated money.

A 2011 Congressional Research Service report found that the tax holiday “did not increase domestic investment or employment.”

Instead of expanding operations or hiring, companies tended to use the money to buy back shares of their own stock — purchases that disproportionately benefit wealthy investors, who are less likely to spend any extra income.

“It has almost no payoff to the economy,” says Adam Looney, senior fellow in economic studies at the Brookings Institution.

“The experience from the 2004 tax holiday suggests that most of this money will be distributed to shareholders, not invested in U.S. business assets,” says Edward Kleinbard, professor at the University of Southern California’s Gould School of Law.

“Interest rates are low, retained earnings are high and credit is available. Most firms thus do not need the repatriated money to fund worthwhile business investments in the U.S.”

Kleinbard notes that the Republican bill leaves one thing conspicuously unchanged: “A U.S. multinational looking to build a factory to serve foreign customers and choosing between a U.S. and low-taxed foreign location will still have a big incentive to locate that business abroad.”

If the plan goes through, and lawmakers don’t limit how the companies can spend the money — requiring them to invest in the U.S., say, or create jobs here — CFRA’s Kessler expects that a “substantial amount” is going to be allocated once more to stock buybacks and dividend payments.

Unemployment is at a 16-year low of 4.2 percent. Economic growth has come in at a healthy annual rate of 3 percent or better in each of the past two quarters. If the tax bill managed to heat the economy much more, the Federal Reserve might have to accelerate its pace of interest rate increases to cool things off.

That would make loans costlier for individuals and businesses and might slow the economy.

Corrects to show that 843 companies took advantage of a 2004 tax holiday on overseas profits, not 9,700.

Barbara Ortutay in New York; Linda A. Johnson in Trenton, New Jersey; and Josh Boak in Washington contributed to this report.