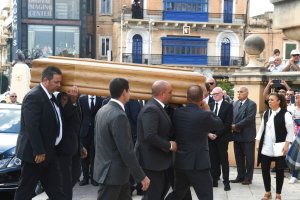 VALLETTA, Malta (AP) — Malta’s Roman Catholic archbishop warned those who killed an investigative reporter with a car bomb that they “would never escape the justice of God” and urged other journalists Friday to pursue the truth without fear.

Archbishop Charles Scicluna celebrated Daphne Caruana Galizia’s funeral Mass in the church nearest to where the 53-year-old Malta native lived before the bomb exploded as she drove away from home on Oct. 16. More than 1,500 mourners packed the venue and several hundred more spilled out into the square outside.

The family has been vocal in its criticism of the government for its failure to root out the kind of corruption that Caruana Galizia covered in her blog, which was a must-read in the small Mediterranean island nation.

While investigators have yet to make any arrests in the case, Scicluna told Caruana Galizia’s killers to “repent before it is too late.”

“Whoever took part, in one way or another, in Daphne’s murder, I have this to tell you: However hard you try to evade the justice of men, you will never escape the justice of God,” he said.

Addressing her fellow journalists, the archbishop said “do not be afraid.”

“I encourage you never to grow weary in your mission to be the eyes, the ears, and the mouth of the people. Do this without fear and with full respect of the truth,” Scicluna said. “Dear journalists, we need you. We need people in your profession who are unshackled, who are free, intelligent, inquisitive, honest, serene, safe and protected.”

As Caruana Galizia’s coffin was driven away from the church, the crowd broke out singing the Maltese national anthem.

The Malta government declared Friday as a day of national mourning in “a sign that no attack on freedom of expression is accepted in Malta’s democracy.”

In Brussels, the flag at European Commission headquarters flew at half-staff in Caruana Galizia’s memory. The commission issued a statement condemning “this brutal attack” that killed her.

“The right of a journalist to investigate, ask uncomfortable questions and report effectively, is at the heart of our values and needs to be guaranteed at all times,” the statement said.

Journalists representing newspapers that included Britain’s Guardian, Germany’s Sueddeutsche Zeitung, Italy’s La Repubblica and the Financial Times wrote an open letter to the commission demanding an investigation into the state of editorial independence in Malta.

Caruana Galizia’s reported on corruption for her blog, which had thousands of followers, and wrote twice weekly for The Malta Independent. One of her targets was Malta Prime Minister Joseph Muscat, whose wife’s name surfaced in the Panama Papers, leaked documents detailing offshore financial accounts maintained by prominent people.

Both Muscat and his wife have denied wrongdoing.

At the time of her death, the journalist was facing 42 libel lawsuits in the Maltese courts. Most of the cases are expected to proceed. Opposition leader Adrian Delia, one of her more recent subjects, has withdrawn the five suits he brought against her.

Malta’s government has offered a 1 million euro ($1.18 million) reward for information leading to those responsible for the killing and full protection for anyone stepping forward.

The journalist’s family has refused to endorse the reward, calling instead for Muscat’s resignation for “failing to uphold our fundamental freedoms” by not rooting out corruption.

The FBI and Europol are helping the Malta police. Dutch experts were also brought in to assist with analyzing forensic evidence from the scene of the crime.

Tajani, who met later with the editors and journalists of The Malta Independent, said the participation of Europol is a sign that Europe is taking the matter seriously.

“We want to know who Daphne’s killer is, but we want to know also who is behind the killers,” he said, saying her killing was a problem “for every person in Europe. If we accept the murder today without a strong reaction, attacks on journalists will only continue.”