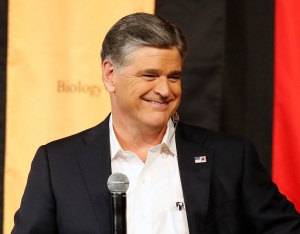 NEW YORK (AP) — After the summer of Rachel Maddow, Fox News Channel’s Sean Hannity ascended to the top of the cable news mountain.

When Bill O’Reilly was working at Fox, there was no question for years who was the top person in cable television talk. His ouster in April following the revelation of sexual harassment settlements put that distinction up for grabs, and MSNBC’s Maddow took the title in July, August and September.

It’s got a near-impossible act to live up to, but the Dodgers-Astros World Series is averaging 16.1 million viewers through five games for Fox, Nielsen said. The thrilling fifth game, won by the Astros in extra innings, was the most-watched contest with nearly 19 million viewers.

Last year’s Cubs-Indians series averaged 23.6 million viewers, primarily on the strength of an epic seventh game that was seen by 40.5 million, the most-watched World Series game since 1991.

Baseball led Fox to the easy win for the week in prime time, with the network averaging 13.2 million viewers. CBS had 7.8 million, NBC had 6.9 million, ABC had 4.5 million, Telemundo had 1.48 million, Univision had 1.47 million, the CW had 1.35 million and ION Television had 1.2 million.

ABC’s “World News Tonight” topped the evening newscasts with an average of 8.4 million viewers. NBC’s “Nightly News” had 8 million and the “CBS Evening News” had 6.2 million.

NBC’s “Nightly News” topped the evening newscasts with an average of 8.2 million viewers. ABC’s “World News” was second with 7.5 million and the “CBS Evening News” had 6.4 million viewers.

ABC is owned by The Walt Disney Co. CBS is owned by CBS Corp. CW is a joint venture of Warner Bros. Entertainment and CBS Corp. Fox is owned by 21st Century Fox. NBC and Telemundo are owned by Comcast Corp. ION Television is owned by ION Media Networks.