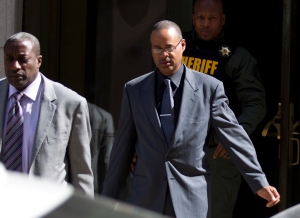 FILE – In this June 10, 2016, file photo, Officer Caesar Goodson, center, leaves the courthouse after his trial in the death of Freddie Gray in Baltimore. A Baltimore police officer involved in arresting Freddie Gray, who later suffered a fatal injury during a police van ride, testified at the driver’s disciplinary hearing Tuesday, Oct. 31, 2017 that Gray did not show any signs he needed medical care when he was first put into the van. Officer Edward Nero testified at the hearing for Officer Goodson, the van driver who could be fired for violating department policies in the case. (AP Photo/Jose Luis Magana, File)

The hearing is expected to continue Wednesday for Officer Caesar Goodson, who drove the van in which 25-year-old Freddie Gray suffered a fatal injury after being arrested in April 2015.

The police department is seeking to fire Goodson for violating police policies during the ride. The department says Goodson failed to fasten Gray in a seatbelt and didn’t take him to a hospital when he requested care.

On Tuesday, Officer Edward Nero testified that Gray “was not showing any signs of a medical emergency” when he was first arrested and placed in the van.

The disciplinary hearing is expected to last into next week.