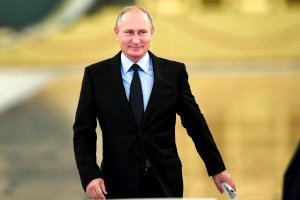 Russian President Vladimir Putin walks in a hall before a meeting with members of the Presidential Council for Civil Society and Human Rights at the Kremlin, in Moscow, Russia, Monday, Oct. 30, 2017. (Kirill Kudryavtsev/Pool photo via AP)

WASHINGTON (AP) — The Latest on the investigation into possible coordination between Donald Trump’s presidential campaign and Russia (all times local):

The Republican chairman of the Senate Judiciary Committee is praising the Justice Department for enforcing a law that requires agents of foreign governments to register with the United States.

Grassley has long prodded the government to better enforce the law, called the Foreign Agents Registration Act. He said “it should be enforced fairly and consistently, regardless of politics or any other factor.”

Grassley’s panel is investigating Russian meddling in the 2016 election.

Former Trump campaign chairman Paul Manafort and his business associate Rick Gates have pleaded not guilty following their arrest on charges related to conspiracy against the United States and other felonies. The charges are the first from the special counsel investigating possible coordination between the Trump campaign and Russia.

Manafort and Gates appeared before a federal judge Monday in Washington. They are charged with a combined 12 counts, including conspiracy to launder money, unregistered agent of a foreign principal, false and misleading FARA statements, false statements, and seven counts of failure to file reports of foreign bank and financial accounts.

White House Press Secretary Sarah Sanders responded Monday to a question about whether the president is considering firing Mueller. She said there is “no intention or plan to make any changes in regards to special counsel.”

Sanders also said the White House expects the investigation into Russian interference in the 2016 election “to conclude soon.”

The investigation resulted in its first charges Monday, with a former campaign adviser to President Donald Trump admitting he lied to the FBI about his contacts with Russians. Separately, Trump’s former campaign chairman, Paul Manafort, and a former Manafort business associate were indicted on felony charges of conspiracy against the United States and other counts.

A House Democrat says he will introduce a Constitutional amendment to limit a president’s authority to pardon.

Cohen said that if the amendment is adopted, it would “prohibit presidents from pardoning themselves, their families, members of their administrations and individuals who worked on their presidential campaigns.”

The White House is distancing itself from the indictment of former campaign chairman Paul Manafort and his deputy Rick Gates, as well as a plea agreement involving a former Trump campaign official.

White House spokeswoman Sarah Huckabee Sanders says most of the alleged activities for which Manafort and Gates have been indicted took place before the 2016 campaign.

Sanders says the alleged misdeeds have nothing to do with Trump.

But she says it “has everything to do” with Hillary Clinton’s campaign and a research firm that produced the dossier of allegations about Trump’s ties to the Kremlin.

Sanders was asked about the guilty plea by former campaign adviser George Papadopoulos. She says Papadopoulos was a “volunteer.”

A senior Russian lawmaker says the indictments of President Donald Trump’s former campaign chairman and an associate indicate that the probe into the alleged collusion between Trump campaign and Russia has failed.

Alexei Pushkov, the head of the information committee at the upper house of Russian parliament, said on state television Monday that the indictments detailing conspiracy and money laundering charges against Paul Manafort are related to his work in Ukraine and “have no relation whatsoever to Russia.”

Pushkov said the indictments represent a “complete fiasco” of special counsel Robert Mueller’s probe, adding that “the mountain has brought forth not even a mouse, but a dead mouse.”

He said Mueller’s probe has been based on “fakes” and championed by those in the U.S. who want to oust Trump and loathe Russia.

Ryan said in a radio interview on WTAQ in his home state of Wisconsin that he doesn’t have anything to say on that, other than “nothing’s going to derail what we’re doing in Congress because we’re working on solving people’s problems.”

Ryan was discussing the Republican effort to overhaul the tax code.

Paul Manafort and Rick Gates were indicted Monday on felony charges of conspiracy against the United States and other charges as part of Special Counsel Robert Mueller’s probe into Russian interference in the 2016 election. Several congressional committees are also investigating the interference.

The top Democrat on the Senate intelligence committee says lawmakers must make clear to President Donald Trump that pardoning any of his associates in the Russia probe would be “unacceptable, and result in immediate, bipartisan action by Congress.”

Warner said former Trump campaign aide George Papadopoulos’ guilty plea of lying to the FBI is “just the latest in a series of undisclosed contacts, misleading public statements, potentially compromising information, and highly questionable actions from the time of the Trump campaign.”

A former campaign aide to President Donald Trump has pleaded guilty to lying to federal agents working for special counsel Robert Mueller as part of his probe into possible coordination between the Trump campaign and Russia.

George Papadopoulos (PAH’-pah-dah-puh-lus) pleaded guilty on Oct. 5 to one count of lying to FBI agents about the nature of his interactions with “foreign nationals” who he thought had close connections to senior Russian government officials. The plea was unsealed Monday.

Papadopoulos is the first person to face criminal charges that cite interactions between Trump campaign associates and Russian intermediaries during the 2016 presidential campaign.

Papadopoulos was a member of the campaign’s foreign policy team. But Trump aides have said he played a limited role in the campaign and no access to Trump.

President Donald Trump says alleged misdeeds by his former campaign chairman were “years ago” and insists there was “NO COLLUSION” between his 2016 campaign and Russia.

Trump reacted on Twitter Monday. He says “Sorry, but this is years ago, before Paul Manafort was part of the Trump campaign. But why aren’t Crooked Hillary & the Dems the focus?????”

He then added: “Also, there is NO COLLUSION!”

The indictments are the first arising from Special Counsel Robert Mueller’s sprawling investigation into possible coordination between Russia and Trump’s 2016 election effort.

He said the president must not interfere with the probe, and if he does, “Congress must respond swiftly, unequivocally, and in a bipartisan way to ensure that the investigation continues.”

Lawmakers in both parties have praised Mueller and said Trump should not fire him.

President Donald Trump’s campaign is telling supporters that he is “still standing” Monday, hours after two former top aides turned themselves in to federal authorities.

The fundraising email from Eric Trump, the president’s son, warns that “There’s new opposition against my father and this Administration every day” and asked supporters to contribute to the re-election effort. The message adds: “as a loyal support of our movement, I know you know the truth.”

The top Democrat in the House is pressing for an “outside, fully independent investigation” to expose Russia’s meddling in the election and the involvement of Trump officials.

That’s the word from Minority Leader Nancy Pelosi of California. In a statement Monday shortly after indictments were unsealed, Pelosi said that even with the accelerating special counsel probe and congressional investigations, another inquiry was warranted.

Pelosi said that defending the integrity of the country’s democracy “demands that Congress look forward to counter Russian aggression and prevent future meddling with our elections.”

Former Trump campaign chairman Paul Manafort and his business associate, Rick Gates, have been indicted by a federal grand jury on charges of conspiracy against the United States and other felony charges.

The indictments unsealed Monday in Washington contain 12 counts, including conspiracy to launder money, failing to register as a foreign agent, false statements, and multiple counts of failing to file reports for foreign bank accounts.

Manafort, of Alexandria, Virginia, and Gates, of Richmond, Virginia, both turned themselves in to the FBI on Monday.

The charges are the first in special counsel Robert Mueller’s investigation into potential coordination between Russia and the Trump campaign. Details on the charges have not been released.

Manafort and Gates surrendered to federal authorities in Washington. They are expected in court later Monday to face charges brought by Mueller’s team. That’s according to one person familiar with the investigation. A second person said that Gates had worked out an arrangement to turn himself in on Monday.

The people spoke on condition of anonymity because they were not authorized to discuss publicly an ongoing federal probe.

The White House is declining comment on a New York Times report that President Donald Trump’s former campaign chairman, Paul Manafort, and a former business associate, Rick Gates, have been told to surrender to authorities.

Administration officials did not comment on the report Monday.

Those are the first charges in special counsel Robert Mueller’s investigation into potential coordination between Russia and the Trump campaign. The Times on Monday cited an anonymous person involved in the case.

The New York Times is reporting that President Donald Trump’s former campaign chairman, Paul Manafort, and a former business associate, Rick Gates, have been told to surrender to authorities.

Those are the first charges in special counsel Robert Mueller’s investigation into potential coordination between Russia and the Trump campaign. The Times on Monday cited an anonymous person involved in the case.

Mueller was appointed as special counsel in May to lead the Justice Department’s investigation into whether the Kremlin worked with associates of the Trump campaign to tip the 2016 presidential election.