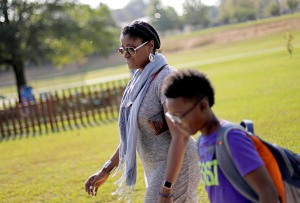 Corrie Davis, left, picks up her son Turner from Big Shanty Elementary School in Kennesaw, Ga., Wednesday, Oct. 11, 2017. A new battle line has formed in the national debate over Civil War flags and symbols. The school last month invited fifth-graders to dress up as characters from the Civil War. Davis says a white student dressed as a plantation owner approached her son and said “You are my slave.” Davis says she wants Cobb County school officials to understand the pain that caused her son. She also wants the school to stop the annual Civil War dress-up day. (AP Photo/David Goldman)

KENNESAW, Ga. (AP) — School officials say there will be no more Civil War-related student dress-up activities at a Georgia elementary school after its “Civil War Day” sparked conflict among students, parents and others.

Big Shanty Elementary School last month invited fifth-graders to dress up as characters from the war.

The mother of a 10-year-old black child says a white student dressed as a plantation owner approached him and said, “You are my slave.”

In a Thursday letter to the mother, Corrie Davis, a Cobb County assistant superintendent writes of the school system’s assurance that student dress-up activities related to the Civil War have come to an end at the school about 25 miles (40 kilometers) northwest of Atlanta.