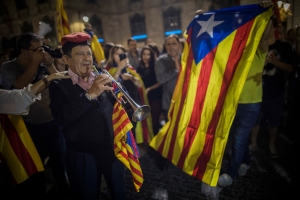 BARCELONA, Spain (AP) — The Latest on Catalonia’s effort to break away from Spain and the Spanish government’s response (all times local):

A small pro-autonomy group based across the border in France is offering shelter to Catalan president Carles Puigdemont.

Robert Casanovas, the president of the Committee for the Self-Determination of North Catalonia, told The Associated Press he has a villa ready for Puigdemont in the village of Theza, as well as “20 to 30” apartments available for other members of his cabinet if they’re forced to leave Spain and want to set up a Catalan exile government.

Casanovas said members met Puigdemont this summer but there hasn’t been any request from Barcelona. He said that “as long as there is no international warrant issued against Puigdemont, he will be able to live in France.”

Pro-independence students are calling for a strike in Catalan universities on Thursday to urge authorities to push ahead with a declaration of independence.

The group Universities for the Republic has staged several strikes and protests over the past month, as the regional government of Catalonia and Spanish central authorities have clashed over an independence referendum that was ruled illegal by Spain’s Constitutional Court.

The political crisis has escalated with the arrests of pro-independence activists and the plans by Spain to exert direct control over the northeastern region.

The group says Thursday’s strike is to urge Catalan authorities to proclaim the Catalan Republic and defend the territory*s institutions.

Spain’s political parties have designated 27 senators to study how the government might intervene in the running of Catalonia and halt the region’s bid to declare independence.

The Article 155 measures it will study include dismissing the Catalan pro-independence regional government, including regional president Carles Puigdemont and his ministers.

The commission is expected to notify Puigdemont of its plans and invite him to defend his case, most likely by Thursday, prior to a Senate vote Friday to activate the measures.

Rajoy’s party has an absolute majority in the chamber, thus guaranteeing approval.

A lawmaker with the ruling Catalan separatist coalition says the regional parliament will hold a Thursday plenary meeting that many fear will become a cover for a vote on declaring independence from Spain.

Catalan president Carles Puigdemont has asked the parliament to convene a debate and vote on how to respond to the central Spanish government’s plan to take direct control of the northeastern region.

Puigdemont’s speech on Saturday was seen as a veiled threat of formalizing an ambiguous declaration of independence earlier this month that he declared suspended in order to earn time for negotiations.

The Spanish government says that no dialogue is possible with independence on the table and is maneuvering to sack all the Catalan top officials and call a snap regional election in the next six months.

A far-left pro-independence party in Catalonia is calling for “mass civil disobedience” in the region following the Spanish government’s unprecedented move to trigger a section of the constitution allowing the central government to intervene in the running of the region.

In an announcement Monday, the CUP, a key ally in the regional parliament to the minority ruling separatist coalition, described the move by Spanish Prime Minister Mariano Rajoy as “the greatest aggression against the civil, individual and collective rights of the Catalan people” since the dictatorship of Gen. Francisco Franco, who died in 1975.

The party said the move will be met by civil disobedience as a form of non-violent resistance. It said it would elaborate on what form of action this would take later in the week.