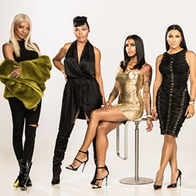 The cast of “The Platinum Life,” a new series on E! Entertainment Network. Photo from http://www.eonline.com.

Now with all the countless reality series hanging around TV networks, some viewers may be skeptical of tuning in. Many may fear The Platinum Life will offer nothing more than the same tired story line most reality shows follow. Rest assured The Platinum Life does bring a major spin to the reality TV world.

What differs most about the women of this show is, although their hubbies may have their own major platforms with huge followings, this group of women are not too far behind their men. These women have established their own careers; and let’s just say they are far from depending on reality show checks.

Being connected to some of the biggest names in the world cannot be easy, and viewers will be able to see firsthand how these women manage, along with maintaining their own successful careers.

Of course, what’s reality TV without a little drama? There’s plenty of that to go around. Stay tuned on E! on Sundays at 10/9c and watch this new reality show unfold, the platinum way.