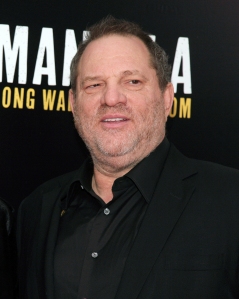 FILE – In this Nov. 25, 2013 file photo, producer Harvey Weinstein attends a screening of “Mandela: Long Walk To Freedom” in New York. Los Angeles police said Thursday Oct. 19, 2017, that it is investigating a possible sexual assault case involving Harvey Weinstein that involves alleged conduct from 2013. The department released few details about the inquiry other than to say it has interviewed a potential victim and its inquiry is ongoing. (Photo by Andy Kropa/Invision/AP, File)

The unidentified woman is an Italian model and actress, according to an announcement of attorney David M. Ring’s press conference. In addition to talking to detectives, the woman and Ring spoke to the Los Angeles Times on Thursday, telling them Weinstein bullied his way into her hotel room, refused to leave and raped her.

Sallie Hofmeister, a representative for Weinstein, said in a statement that Weinstein “unequivocally denies allegations of non-consensual sex.”

The Los Angeles investigation comes after announcements last week by police in New York and London that they are taking a new look at allegations involving the Oscar-winner. New York police are taking a fresh look for complaints involving Weinstein and the department has encouraged anyone who may have information about abuses by the producer to contact the department. London police are investigating allegations of sexual assault against him made by two women.

Nyong’o accused Weinstein of several incidents of harassment in an op-ed piece published by The New York Times on Thursday, including a 2011 incident in which she said the mogul tried to give her a massage at his Connecticut home. She refused, instead giving the mogul a massage and leaving when he said he wanted to take off his pants, Nyong’o wrote.

Also on Thursday, a group of about 30 staffers for The Weinstein Company stated in a letter published online by The New Yorker that they didn’t know they were “working for a serial sexual predator.”

The employees say they knew of Weinstein’s “infamous temper” and that he could be “manipulative,” but didn’t know “that he used his power to systematically assault and silence women.”

“We know that in writing this we are in open breach of the non-disclosure agreements in our contracts,” the letter stated. “But our former boss is in open violation of his contract with us – the employees – to create a safe place for us to work.

Representatives for Weinstein and The Weinstein Company didn’t immediately return a request for comment on the letter Friday.

The stories of harassment and abuse dating back decades has led to the total downfall of a producer who once ruled Hollywood’s awards season with a string of contenders including “Shakespeare in Love,” for which he shared an Oscar, and films such as “The King’s Speech” and “Silver Linings Playbook.”

Since The New York Times published its initial expose on Oct. 5, Weinstein has been fired from the company he co-founded, expelled from the Academy of Motion Picture Arts and Sciences and the producers guild has initiated his expulsion. Honors conferred by Harvard University and the British Film Institute have been rescinded, and several Democratic lawmakers have donated political contributions they received from Weinstein to charity.

Ring said in a statement Thursday that the breadth of accusations against Weinstein compelled his client to speak to police.

“My client is grateful to all the courageous women who have already come forward to finally expose Weinstein,” Ring said. “These women may not have realized it, but they gave my client the support and encouragement to hold Weinstein accountable for this horrible act.”