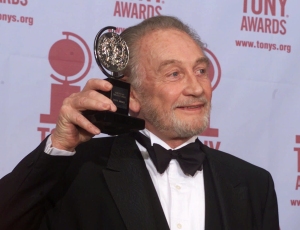 FILE – In this file photo dated Sunday, June 4, 2000, Roy Dotrice poses with his Tony award for Best Featured Actor in a Play for his work in “A Moon For The Misbegotten,” at the 54th annual Tony Awards ceremony in New York. The family of veteran British actor Roy Dotrice said Monday Oct. 16, 2017, that he has died aged 94, in his London home. (AP Photo/Richard Drew, FILE)

LONDON (AP) — Roy Dotrice, a veteran British actor, died at his London home on Monday. He was 94.

Dotrice was known for his role as Leopold Mozart in the Oscar-winning film “Amadeus” and his many theater and TV roles.

He won many accolades throughout his lengthy career including a Tony Award in 2000 for his role in the Broadway revival of “A Moon for the Misbegotten.”

He gained many new fans later in his career as narrator for audiobook editions of George R.R. Martin’s “A Song of Ice and Fire” series of novels, which helped inspire the TV fantasy “Game of Thrones.”

Dotrice was also a wireless operator and an air gunner with the Royal Air Force prior to his acting career. His plane was shot down and he was a prisoner of war from 1942 until 1945.

He sometimes performed for other prisoners in shows designed to raise their spirits and took up acting fulltime after the conclusion of World War II.

He was honored by Queen Elizabeth II in 2008 when he was made an Officer of the Most Excellent Order of the British Empire.

His family said his three daughters, grandchildren and great grandson were with him when he died. His wife Kay died in 2007 after 60 years of marriage.