TRENTON, N.J. (AP) — A Christian Indonesian couple who fear they’ll be deported if they follow orders to report to U.S. immigration officials have taken refuge in a church run by a candidate in New Jersey’s governor’s race.

The Rev. Seth Kaper-Dale offered sanctuary in the Reformed Church of Highland Park to Arthur Jemmy and his wife, Silfia Tobing, last week.

The pair, whose visas have expired, fear they’ll join seven other Indonesians in New Jersey who were deported and four others who left on their own as Immigration and Customs Enforcement reviewed their status this year.

The Green Party candidate is waging a long-shot bid in the race to replace Republican New Jersey Gov. Chris Christie.

He has highlighted his long-running efforts to help immigrants living in the state illegally in his campaign. 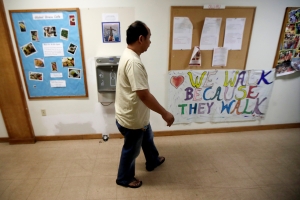 Arthur Jemmy walks through a hallway at The Reformed Church of Highland Park, where he and his wife are taking sanctuary to avoid deportation, Thursday, Oct. 12, 2017, in Highland Park, N.J. The church, who is led by pastor Seth Kaper-Dale, a Green Party candidate in the New Jersey gubernatorial election, has a history of hosting immigrants in danger of deportation. The candidate’s platform includes declaring New Jersey a sanctuary state. (AP Photo/Julio Cortez)