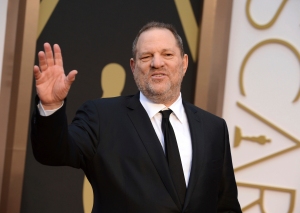 FILE – In this March 2, 2014 file photo, Harvey Weinstein arrives at the Oscars in Los Angeles. In the wake of sexual harassment and abuse allegations against Weinstein, many in Hollywood are calling for sweeping changes to the entertainment industry to prevent the mistreatment of women. Among some of the changes experts recommend are an independent agency to investigate harassment complaints and preventing sexual harassment allegations from being hidden behind non-disclosure agreements. (Photo by Jordan Strauss/Invision/AP, File)

LOS ANGELES (AP) — “That’s how it works,” actress and director Sarah Polley recalls Harvey Weinstein saying to her years ago in his office. If she agreed to a “very close relationship” with him she could go on to be a star and win awards, he said.

He told her that a famous actress had once sat in her seat and that her success was because of their “close relationship,” she wrote in an essay for The New York Times Saturday. Polley was 19 at the time and wasn’t particularly interested in being a star or continuing to act.

“I was purely lucky that I didn’t care,” she wrote.

“That’s how it works” has been Hollywood’s dirty little open secret for its entire history, where men in power have been able to prey on the dreams of stardom of many young women. The quid pro quo sexual harassment even got a cutesy name: The casting couch.

And yet Weinstein’s downfall after a surge of accusations of sexual harassment and assault from women over the past three decades, suddenly calls for “change” are a common refrain from the industry’s most well-known names.

But is meaningful change even possible in a business that relishes in its own mythology of ambition, ego, art and money that has allowed and enabled systematic sexual harassment for so long? Weinstein was a man whose aggression and anger was turned into legend, whose bullying was canonized, whose devil-may-care attitude attracted the edgiest directors and whose companies put out cinematic classics that big studios wouldn’t dare touch. Outside of public accusations, does the power structure in Hollywood even want to disrupt the way things work?

“Leadership has to come from the top in stopping harassment,” said Chai Feldblum, the commissioner of the Equal Employment Opportunity Commission.

Sexual harassment is a widespread issue across the country and in many industries, but the entertainment sector presents a uniquely difficult environment for reporting instances when those who work there are essentially independent contractors and freelancers. Oftentimes the harassment is coming from the top — a director, a producer, a CEO who is often considered more worthwhile to protect than the accuser. And even when accusations reach the level of a lawsuit, they have a tendency to disappear under settlements and non-disclosure agreements.

Condemnation for Weinstein’s alleged conduct has been nearly universal and the fallout dramatic — he was fired from his company, stripped of his Academy of Motion Pictures Arts and Sciences membership, and his Producers Guild status is up for debate Monday. But statements pledging meaningful change and or introspection from the institutions that run the business — from the studios to the talent agencies and guilds have been few.

The labor union SAG-AFTRA, which represents some 160,000 actors and media professionals was among the first to state that it would do more to ensure the safety of women in the industry and reminded of its Safety Hotline, where members can report safety violations including harassment and inappropriate or aggressive behavior.

Jeremy Zimmer, the CEO of UTA, one of the top agencies in Hollywood, wrote in a memo to employees that “UTA will never be silent or complicit” and added that anyone who feels uncomfortable, threatened or exposed, whether client or employee, is safe to come forward.

“Our behaviors must model the highest ethics and standards,” Zimmer wrote.

The Writers Guild of America East also promised full support to members who report harassment and assault and said that it is reviewing its procedures and taking suggestions from members on how the union can address the issue.

And Warner Bros. — the only major studio to respond to inquiries from The Associated Press — issued a statement saying that it is, “committed to ensuring that our workplace is free from unlawful harassment and retaliation, including sexual harassment.” The studio said that it requires management level executives to participate in regular trainings and encourages employees to report concerns.

“We are constantly reviewing our policies to make changes and improvements as needed,” the statement said.

The majority of major studios, agencies, management companies and publicity firms have been quiet, though. Ronan Farrow’s article in The New Yorker described a “culture of complicity” regarding Weinstein’s behavior at The Weinstein Co. and his former company, Miramax. Many have called it an open secret that implicates every corner of the industry.

Some say a positive step could be to diversify boards and leadership positions. Cathy Schulman, a veteran producer and president of the advocacy group Women in Film believes the culture that enabled the systematic sexual harassment by Weinstein is the same that systematically excludes women and people of color from positions of power both in front of and behind the camera.

Schulman is also looking for the studios and talent agencies to speak up.

“It’s those people who make decisions about which content to finance,” Schulman said. “Are they going to make a change because of all this?”

Already, Amazon Studios suspended one of its top executives, Roy Price, after producer Isa Hackett alleged sexual harassment in The Hollywood Reporter. It is reevaluating projects in the works with The Weinstein Co.’s television arm. But, as with Weinstein, action only came after sexual harassment was alleged in the press.

Cynthia Shaprio, an employee advocate and author of the book “Corporate Confidential,” thinks one step would be instituting a separate, independent agency that would be a safe space for complaints in the entertainment industry, like the EEOC or the labor board.

“If they get 10 complaints on one person, they investigate,” Shapiro said. She also thinks it should be illegal for anything pertaining to unwanted sexual advances or quid pro quo to be part of non-disclosure or arbitration agreements — something that has prevented many cases of sexual harassment and assault from coming to light.

“That would be a great loophole to close,” she said.

David Poland, a veteran entertainment industry reporter who writes for Movie City News, speculated that some compromise solution will be reached.

“What business always wants is calm. So someone will come up with a standard that will be real, but seen as not severe enough by victims and victims groups, and that will become the standard for the industry moving forward,” Poland said. “And hopefully, there will be a real impact on the next generation of sick men.”

Some are more optimistic that this is an actual tipping point, like SAG-AFTRA president Gabrielle Carteris.

“The hardest thing about change is that it’s not immediate,” said Carteris. “This has been going on for decades but what is it now that is making this of public interest? It’s that people are saying ‘no more.'”