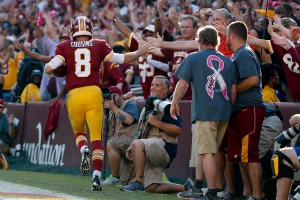 Washington Redskins quarterback Kirk Cousins (8) is greeted by the fans after scoring a touchdown on a quarterback keeper during the second half of an NFL football game against the San Francisco 49ers in Landover, Md., Sunday, Oct. 15, 2017. (AP Photo/Alex Brandon)

LANDOVER, Md. (AP) — Jay Gruden was hardly happy after this victory. That subdued reaction signifies progress, according to Washington’s coach.

Kirk Cousins and the Redskins sweated it out and barely held on to beat past — and possibly future — mentor Kyle Shanahan’s winless San Francisco 49ers 26-24 on Sunday. The Redskins (3-2) blew a 17-point lead amid injuries and a pair of turnovers and survived a last-minute drive by 49ers rookie quarterback C.J. Beathard.

“You can see that we’re starting to turn a corner a little bit when you’re not quite as ecstatic as you normally would be after a win,” Gruden said. “I know we can play a lot better.”

That includes Cousins, who threw for two touchdowns, ran for one and had an interception against the team he has been linked to for next season because of his connection with Shanahan. Gruden called Cousins’ play “efficient” after the quarterback was 25 of 37 for 330 yards passing and added 27 yards on the ground.

Despite the inconsistencies, Cousins came away smiling.

“I think we did a good job as an offense,” said Cousins, who had TD passes to Josh Doctson and Samaje Perine . “It wasn’t perfect. There were a couple mistakes, but all in all (we) did a lot of good things.”

Shanahan benched Brian Hoyer for Beathard, who threw for 245 yards, a touchdown and an interception and nearly led an impressive comeback.

Beathard, a third-round pick out of Iowa and grandson of former Redskins Super Bowl-winning general manager Bobby Beathard, took over for Hoyer with about six and a half minutes left in the first half and the 49ers (0-6) down 14-0. After Hoyer was 4 of 11 for 34 yards, Beathard went 19 of 36 in his first NFL action.

Running back Carlos Hyde said Beathard looked “like he’d been out there before.” Shanahan said Beathard had done enough to supplant Hoyer as the starter.

With the 49ers down by two in the final minute, Beathard led them toward field goal range with a 12-yard pass to former Washington receiver Pierre Garcon along the sideline. He was intercepted by Kendall Fuller on fourth down to seal the result that was much closer than many expected.

“We didn’t think we had to make the game that close,” said Redskins left tackle Trent Williams, who played through a knee injury. “It shouldn’t have been a nail-biter coming down towards the end.”

San Francisco is now the first in NFL history to lose five consecutive games by three points or fewer — a combined 13 points.

Redskins tight end Vernon Davis had a fumble to set up a 49ers touchdown and a 51-yard catch against the team he played his prime years with. Davis fumbled after making a catch in the third quarter, and Hyde ran for a 1-yard touchdown on the next play to tie the score.

Davis made up for that mistake by catching a pass from Cousins at the Washington 45 and running 33 more yards to the San Francisco 22. Cousins scored not long after.

“Up the seams, just run as fast as you possibly can, that’s what coach always says,” Davis said. “I saw an opening so I just went right around the defender and looked up for the ball and Kirk … he’s good at those, he put it right there and I didn’t have to do much.”

A key call on San Francisco’s last drive came on second-and-10 at Washington’s 40 with less than a half-minute left.

Garcon was called for offensive pass interference, which pushed the Niners back to midfield. They wouldn’t gain another yard. Garcon argued the ruling on the field; asked about it in the locker room, he replied: “I cannot talk about the referees.”

Shanahan said he would have let Robbie Gould attempt a 57-yard field goal had the 49ers wound up with fourth down at the 40.

Redskins: CB Bashaud Breeland will have an MRI on his left knee after being on the receiving end of a low block. Gruden said it was an MCL issue. … Rookie DL Jonathan Allen left with a foot injury in the fourth quarter and will also have an MRI. … S Stefan McClure left with a sprained left knee. … RB Rob Kelley (ankle) and CB Josh Norman (rib) were inactive.