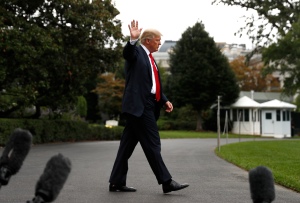 President Donald Trump waves as he walks to board Marine One helicopter on the South Lawn of the White House in Washington, Wednesday, Oct. 11, 2017, for a short trip to Andrews Air Force Base, Md., and then onto Harrisburg, Pa. (AP Photo/Carolyn Kaster)

WASHINGTON (AP) — A House Democrat offered a resolution Wednesday to impeach President Donald Trump but let it die before action was taken, saying he would force a vote later.

The move by Rep. Al Green, D-Texas, edged his party toward a confrontation craved by some of its most liberal supporters but opposed by many others — including House Minority Leader Nancy Pelosi — who consider it ill-advised and premature. It would have no chance of succeeding in the Republican-run chamber.

Green presented his 15-page articles of impeachment to the House as a privileged resolution, a special procedure that could have forced a vote within the next two days. When his name was called later to consider his proposal, he was not in the chamber and the resolution died.

Green can revive his effort and said in an interview that he will bring it back for a vote, but would not say when. He said he didn’t appear on the House floor when it was time to consider the measure, effectively withdrawing it, because he wanted to give colleagues and voters a chance to consider it.

“It would be a disservice to the American people for it to be voted on immediately,” he said.

Several Democrats said party leaders have tried talking Green out of forcing what would be a contentious vote for Democrats. It would make them choose between siding with liberal constituents eager to oust Trump and moderates preferring to await the results of investigations by special counsel Robert Mueller and multiple congressional committees.

His impeachment articles do not accuse Trump of any crimes, which the lawmaker argues are not necessary to remove a federal official from office. The Constitution says that for removal, officials must be convicted by the Senate of “treason, bribery, or other high crimes and misdemeanors.”

While Trump is intensely unpopular among Democrats in and out of Congress, party leaders have considered an impeachment effort unrealistic and politically damaging unless an investigation into his actions produces solid evidence of an impeachable crime.

Asked if Pelosi, D-Calif., supported such a move, an aide called attention to previous statements she has made.

“What are the facts that you need to make a case on? What are the rules he may have violated? If you don’t have that case, you’re just participating in more heresay,” Pelosi said in May on CNN. She added, “We owe the American people some stability in all of this.”

Green said he has not tried selling his proposal to others, saying, “I’m prepared to stand alone.”