ISLAMABAD (AP) — The Latest on the release of an American woman, her husband and their three children after being held for years by a group with ties to the Taliban (all times local):

Canadian Prime Minister Justin Trudeau has thanked Canada’s allies around the globe for their work in achieving a positive resolution to the five-year hostage situation involving Canadian citizen Joshua Boyle, his American wife, Caitlan Coleman, and their three children.

Trudeau, speaking during a visit to Mexico, asked that the family’s privacy be respected. Officials announced Thursday that the family was freed in a rescue orchestrated by the U.S. and Pakistan governments.

Boyle and Coleman were kidnapped in 2012 while travelling in Afghanistan.

Trudeau says, “We’re pleased that the ordeal that they’ve been through these past years has finally come to an end.” 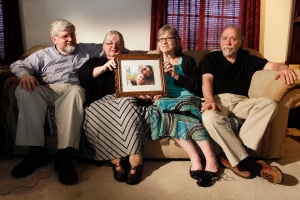 FILE – In this June 4, 2014, file photo, from left, Patrick Boyle, Linda Boyle, Lyn Coleman and Jim Coleman hold photo of their kidnapped children, Joshua Boyle and Caitlan Coleman, who were kidnapped by the Taliban in late 2012, Wednesday, June 4, 2014, in Stewartstown, Pa. Pakistan’s military says soldiers have recovered five Western hostages held by the Taliban for years. Pakistan’s army did not name those held, only saying it worked with U.S. intelligence officials to track down the hostages and free them after discovering they had been brought into Pakistan. (AP Photo/Bill Gorman, File)