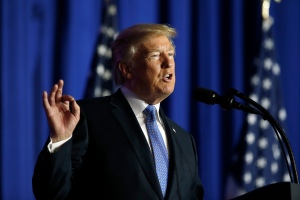 FILE – In this Wednesday, Sept. 27, 2017, file photo, President Donald Trump speaks about tax reform at the Farm Bureau Building at the Indiana State Fairgrounds, in Indianapolis. The Trump administration’s plans to slash corporate taxes and make other business-friendly changes to the nation’s tax laws have helped lift U.S. stocks in recent weeks. And depending on which changes, if any, ultimately end up signed into law, more companies could see bigger gains. (AP Photo/Alex Brandon, File)

WASHINGTON (AP) — Each year, taxpayers subsidize America’s homeowners by roughly $70 billion, with the benefits flowing disproportionately to coastal areas with high incomes and pricey homes, from New York and Washington to Los Angeles and San Francisco.

The subsidy for homeowners comes in the form of a deduction from their taxes for the interest they pay on their mortgages. An affluent New Yorker, for example, would have saved an average of $3,694 in 2015, according to an analysis of IRS data released Wednesday by the real estate company Apartment List. In metro Los Angeles, the deduction was worth an average of $4,568, in San Francisco still more: $5,500.

But under President Donald Trump’s tax proposal, some Americans would likely be steered away from this tax break. Here’s why: Trump’s plan would double the standard deduction, which taxpayers can take if they don’t itemize deductions. The doubled standard deduction could exceed the savings many receive now from itemizing their expenses for housing, state and local taxes and related costs.

But the Trump plan would also eliminate many existing itemized deductions, including those for state and local taxes, so that some people who now itemize might end up paying more.

The president’s proposal would essentially marginalize the use of the mortgage interest deduction, which is the government’s primary form of direct housing assistance: It distributes three times more money this way than it does in the form of vouchers for impoverished renters.

Trump administration officials say their tax plan is designed to benefit the middle class. Yet it’s not clear from the scant details of the framework released so far how many families would enjoy lower tax bills and how many would face higher bills.

Even though the Trump measure would preserve the mortgage interest deduction, it’s confronting resistance from the real estate industry because it would likely reduce the number of people seeking the deduction.

Estimates by the real estate firm Zillow suggest that someone buying a home worth at least $305,000 today would still qualify for the deduction. But under the Trump plan, only homes worth $801,000 or more would receive the deduction.

This has led the industry to push back against the plan.

“We don’t want to go backwards — we don’t want to lose what incentives that we have,” said Jamie Gregory, deputy chief lobbyist for the National Association of Realtors.

The National Association of Homebuilders says it might be open to eliminating the mortgage interest deduction so long as homeownership was protected elsewhere in the tax code through the use of a possibly more generous tax credit. (A credit, which is subtracted from the amount of tax someone owes, is more generous than a deduction, which reduces the amount of income to be taxed.)

The advantage of moving to a credit is that more homeowners would be eligible to claim it than the 34 million who receive the mortgage interest deduction, said Rob Dietz, the homebuilder association’s chief economist. But there are no signs that the idea of a credit has gained traction within Congress or the White House.

Trump proclaimed in June that his tax plan would accelerate economic growth to ensure that “hard-working Americans enjoy a fair chance at becoming homeowners.”

Chris Salviati, a housing economist at Apartment List, noted that the main effect of the mortgage interest deduction is to enable people to spend more on homes rather than to increase ownership, which is near a 51-year low.

Though the benefits of tax breaks for housing skew most toward people in the top 20 percent of income, they also tend to help middle class Americans. Roughly half the households in metro Washington with incomes between $74,000 and $112,000 — a group that could be considered middle class in that area — take the mortgage interest deduction and saved an average $2,530 in 2015. The average home price in the Washington area is just below $400,000.

Areas with lower home values tend to benefit less from the deduction. A similar group of middle-income households in Indianapolis — where the average home cost around $140,000 — saved only $655 on average in 2015, and just 19 percent of them took the deduction. The savings for middle-income households are just $691 in Cleveland, $666 in Little Rock, Arkansas, and $673 in Memphis, Tennessee.

Yet the Apartment List analysis also indicates that Trump’s tax plan would do little for lower-income households. A mere 11 percent of households with income below 80 percent of the national median qualify for the mortgage interest deduction or rental housing vouchers.