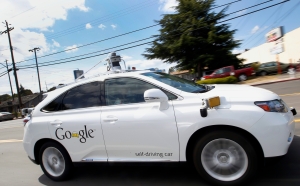 FILE – In this May 13, 2015, file photo, Google’s self-driving Lexus car drives along street during a demonstration at Google campus in Mountain View, Calif. A Senate panel plans to take up a bill Oct. 4, 2017, intended to clear away obstacles to a new era in which cars drive themselves. Safety advocates said it would give automakers free reign to put unsafe vehicles on the road. (AP Photo/Tony Avelar, File)

WASHINGTON (AP) — A bill to clear away obstacles to a new era of self-driving cars is facing opposition from safety advocates who say it would give automakers free rein to put unsafe vehicles on the road.

A Senate panel is scheduled to take up the measure on Wednesday. It would allow automakers to apply for exemptions to current federal auto safety standards in order to sell up to 50,000 self-driving cars and light trucks per manufacturer in the first year after passage. Up to 75,000 per manufacturer could be sold in the second year, and 100,000 each year thereafter.

Action by the full Senate is still required and differences with a similar bill passed by the House would have to be worked out before the measure could become law.

Industry officials said the bill would be a boon to safety since an estimated 94 percent of crashes involve human error, as well as have a profound impact on the lives of the disabled.

“Not taking action now could potentially delay life-saving technologies,” said Wade Newton, a spokesman for the Alliance of Automobile Manufacturers.

But Joan Claybrook, a former head of the National Highway Traffic Safety Administration under President Jimmy Carter, said the bill is one of the “biggest assaults” ever on the landmark 1966 law that empowered the federal government to set auto safety standards.

“The public will be the crash dummies in this experiment,” she told reporters on a telephone conference call with safety advocates.

Under the bill, the NHTSA would have 180 days after an application in which to grant or deny the exemption. Manufacturers are supposed to show that they can provide an equivalent of safety, but six months isn’t enough time for an agency that is undermanned and lacks expertise in self-driving technology to effectively make such determinations, safety advocates said.

The bill is broad enough to permit exemptions to standards that protect occupants in a crash, like air bags, safety advocates said.

The bill also allows manufacturers to make equipment like steering wheels and brakes inoperable when automated driving systems are in use without having to apply for an exemption.

There are no federal safety standards for many of the technologies that are at the heart of self-driving cars, like software and sensors, and there is no sign that the Trump administration would create such standards. Rather, administration and auto and technology industry officials have suggested that new regulations would be unable to keep up with rapid developments in technology and would slow deployment of self-driving cars.

The bill pre-empts state and local governments from enacting their own safety standards in the absence of federal standards. Industry officials have complained that being forced to comply with a “patchwork” of state safety laws would be unmanageable. States would still be responsible for licensing vehicles and enforcing traffic laws.

“We shouldn’t compromise federal and state protections that have enhanced auto safety for decades in the pursuit to bring these cars to market,” said David Friedman, a former NHTSA acting administrator during the Obama administration.

Automakers have experienced the largest number of recalls for safety defects in the industry’s history in recent years. General Motors, for example, was found to have buried evidence of an ignition switch defect that ultimately caused the recall of 2.6 million small cars worldwide. The switches played a role in at least 124 deaths and 275 injuries.

Also, about 70 million defective Takata air bag inflators are being recalled in the U.S. The inflators are responsible for up to 19 deaths worldwide and more than 180 injures.