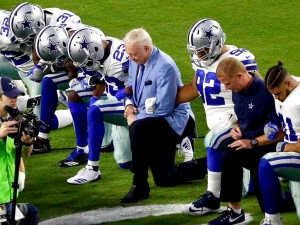 FILE – In this Monday, Sept. 25, 2017 file photo, the Dallas Cowboys, led by owner Jerry Jones, center, take a knee prior to the national anthem prior to an NFL football game against the Arizona Cardinals, in Glendale, Ariz. President Donald Trump’s clash with the scores of professional football players who knelt during the Star Spangled Banner last weekend has set off a heated debate over proper etiquette during the national anthem. But throughout the world, flags, anthems and other national symbols can often divide as much as they unify, especially in countries with large religious or ethnic divisions. (AP Photo/Matt York, File)

The fight for racial equality, specifically ending police brutality, rages on as NFL teams across the nation are kneeling during the national anthem to protest the treatment of African Americans.

“I find it appalling that people are more concerned about a flag than about the fact that some in this country are living in a police state that has historically been given permission to mutilate, disrespect, harass, and kill a whole population of people based on their skin color and racial background,” education major Briana Robinson said. “Our military is important, our children are important, and our Black population is important. That is what taking a knee means to me. It is acknowledging the dark places in this country that need to be brought to light without disrupting the peace in the nation. Anyone who feels as though a player taking a knee is negatively affecting our country needs a reality check.”

Prominent leaders, such as Texas Representative Sheila Jackson Lee, are speaking out against President Trump’s words and speaking up for the players, insisting that this protest falls under their first amendment rights and, therefore, should not be blocked.

“It is not a question of disrespect for the flag,” said Dr. Soji Akomolafe, political science professor. “It is a question of first amendment rights: the right to free speech. If he (Colin Kaepernick) was breaking the law, the police would have arrested him.”

When Colin Kaepernick started this a year ago, a few paid attention and few followed his lead, but now players are rallying together to show their support for the cause in their own ways. Some teams, such as the Cowboys, are opting to stand as a team with their arms linked together in unity instead of kneeling and some players are still kneeling.

“The country needs to pick a side on who we are as a country,” said Aysia Jackson, mass communications major. “This is no longer a time to remain ignorant and I can only hope that the nation makes the right choice. The country can either finally address the minorities they’ve been oppressing for years and actually listen to what we are saying or they can continue to change our narratives which will only lead to more protests. The next step is up to the country.”