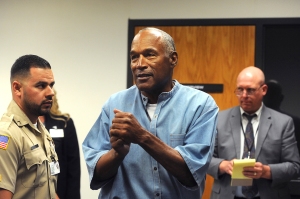 LAS VEGAS (AP) — O.J. Simpson’s attorney says he expects the former football star and actor to be released from a Nevada prison “a few days” after Sunday, the first eligible date for Simpson to be paroled under a decision reached by a state panel in July.

Malcolm LaVergne tells ABC’s “Good Morning America” that Simpson is “making arrangements” for his release but nothing has been finalized.

Simpson is being released after spending nine years behind bars in a 2008 armed robbery and kidnapping case. LaVergne says Simpson wants to see his family and enjoy “the very simple pleasures” of life, including eating seafood and steak and getting a new iPhone.

Simpson was acquitted of the 1994 killings of ex-wife Nicole Brown Simpson and her friend Ronald Goldman. He was later found liable for their deaths in civil court.