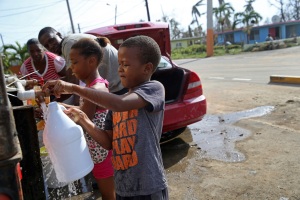 Children fill up bottles with water at a water distribution point, in the aftermath of Hurricane Maria in Loiza, Puerto Rico, Sunday, Sept. 24, 2017. Federal aid is racing to stem a growing humanitarian crisis in towns left without fresh water, fuel, electricity or phone service by the hurricane. (AP Photo/Gerald Herbert)

WASHINGTON (AP) — House Speaker Paul Ryan promised Monday that Washington will make sure that the people of hurricane-devastated Puerto Rico will “have what they need.”

The Wisconsin Republican’s statement came as authorities struggle to provide adequate relief to the more than 3 million U.S. citizens on the island territory, which is without power and has seen terrible devastation.

Ryan said Congress is working with the administration to make sure Puerto Rico gets all of the help that’s required. Lawmakers approved $15 billion in hurricane relief in the wake of Harvey but tens of billions of dollars more is sure to be needed in the weeks and months ahead.

“The stories and images coming out of Puerto Rico are devastating,” Ryan said. “Congress is working with the administration to ensure necessary resources get to the U.S. territory. Our fellow citizens in Puerto Rico remain in our prayers as we make sure they have what they need.”

The tragedy has received relatively little media coverage compared to Harvey and Hurricane Irma, and President Donald Trump hasn’t brought much attention to it.

An aide to the House Appropriations Committee, Jennifer Hing, said Monday that the magnitude of the damage and the humanitarian crisis in Puerto Rico makes it likely there will be congressional action on the next installment of disaster aid by mid-October.

Velazquez said Puerto Rico was “already struggling from financial and economic challenges before Maria made landfall. Now, the Island has been dealt a crushing blow and needs all the assistance it can get.”

She called the hurricane “a catastrophe of historic proportions that will require coordination at all levels of government.” She said and others in the NY delegation will be advocating for federal funding to swiftly repair and rebuild Puerto Rico’s electrical grid, help small businesses recover and address other problems.