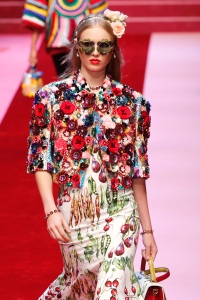 Many fashion houses are showing their collections outdoors this season, or at least throwing open the windows on their grand palazzi venues, betting on Mother Nature with open-air shows. The late summer-early fall weather has cooperated fully.

Here are some highlights from Milan as previews for next spring and summer’s womenswear collections mark their fifth and penultimate day on Sunday:

SHADES OF MELANIA AT DOLCE&GABBANA

There was something for everyone on Dolce&Gabbana’s “Queen of Hearts” runway — even an elaborate, colorful applique jacket reminiscent of the $51,000 number that Melania Trump famously wore to a summit in Sicily.

Could the message be that there is a queen — or first lady — in everyone?

While Domenico Dolce and Stefano Gabbana maintained their pact to supply the world with sexy dresses for day and evening, they also gave the collection some decidedly off-beat touches.

The Melania floral jacket, for example, was worn over a vegetable print dress that is unlikely to attract the First Lady’s eye for clean lines.

Dolce&Gabbana’s Queen of Hearts was a central theme for the season, appearing in its most elaborate version in heavily bejeweled dresses or as brightly sequined tops and leggings.

In a more unusual turn for the designers, a wrap dress with an abstract print was paired with yellow tights with oversized blue polka dots — a more eccentric, or perhaps just more youthful, combo than usual Dolce&Gabbana look. It suggests the designers are taking some cues from the Millennials who have packed their front rows in recent season.

A raffia weave top in primary colors definitely fits the duo’s Sicily vibe, but a rainbow weave corset over a matching diaphanous evening gown had Harlequin feel that veered toward costume.

Marni is undergoing a color and floral revival in Francesco Risso’s second womenswear collection at the 23-year-old fashion house.

Risso said the collection represents a treasure hunt of objects collected by a scavenger, who then adopts and incorporates them into her life. There’s a vein of nostalgia that runs through the collection, in both the prints and the slightly retro silhouette made contemporary by its proportions.

So in Risso’s fashion treasure hunt, a 1950s-style print bathing suit in sturdy yesteryear cotton becomes a top, worn with a seafoam green floral skirt. The hemlines are left unfinished and the proportions slightly oversized.

The florals aren’t mere prints but attic-trove brocades that offered texture or dainty, orderly granny flower prints. Other pieces are bejeweled, as if for some off-beat royal court.

The silhouette had a strong daywear vibe and primarily consisted of dresses and skirts, with some boxy boyish pants and bowling shirt combs.

The brand’s trademark furs included one inspired by Cruella Deville.

The Marni woman “has this sort of ’20s languor, that is sculptural at the same time,” Risso said backstage.

FERRAGAMO UNDER THE STARS

Models walked on a Plexiglas runway over a fresh lawn of real grass sprinkled with plastic daisies. The fashion crowd was treated to a Botticelli-inspired light show on the façade of Milan’s stock exchange building before being invited inside to party with the British band “Clean Bandit.”

The celebratory atmosphere was all meant as an antidote to trying political times, the designer said.

“I wanted to create positive feelings at this particular moment,” Rigoni said. “At least in fashion, we want to dream a little.”

The foulard was the star of Rigoni’s collection for Ferragamo.

Twisted for dramatic effect, they became the straps on halter dresses or oversized stitching on an off-the-shoulder dress, with the length of the silken scarf trailing. And dramatically, Rigoni created trompe l’oeil prints that gave the illusion of draped foulards on simple, straight dresses.

Rigoni said he imagined how he would dress Salvatore Ferragamo’s iconic clients, taking inspiration from Greta Garbo, Carmen Miranda, Brigitte Bardot and Marilyn Monroe to create straight silhouettes from the 1920s, fringe detailing from the 1930s and flared trousers from the 1970s.

The Ferragamo rounded gancio, or clasp, was a motif throughout, as an anchor for scarfs, a handle on mini-bags and even a pocket detail. Laser perforations on suede dresses and coats had the feel of crochet, while hand-painted python boots and coats underlined the brand’s technical prowess. Colors included bright pink, emerald green, red and plum punctuated by neutrals.

“I wanted a relaxed vibe and an easiness that is perceptible and refreshing,” Rigoni said. “The collection is fresh because there is a casualness, even if it is very studied.”

Jean said she was impressed by the way the Cholitas, who were spurned for their traditional colorful dresses, defied the discrimination by becoming professional wrestlers.

“They claimed their independence with true sport,” Jean said. “It is incredible because they fight in their typical clothes. Now they are considered goddesses.”

Alessandro De Benedetti next-season creations for Mila Schoen have a clarity of line that defies the craft behind them.

In keeping with the brand’s identity, De Benedetti concealed the closures on his looks. But he went even one step further, creating elegant, ankle-length dresses by simply — or not so simply — draping fabric, up to seven meters of it for each dress.

De Benedetti said Kim Novak was one of his inspirations, and he dubbed one of his creations, a sleek suit with a dizzying optical effect, “Vertigo,” after the Alfred Hitchcock movie in which she starred.