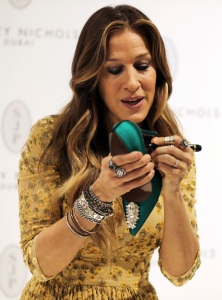 FILE – In this Dec. 7, 2014 file photo, actress and designer Sarah Jessica Parker, signs a shoe during the SJP shoe collection signing ceremony in Dubai, United Arab Emirates. Parker of “Sex and the City” fame will be taking four guests shoe-shopping at Bloomingdale’s, then sending them to the New York City Ballet as part of an Airbnb launch of local tours and other experiences in New York. Parker’s listing goes live Tuesday, with four spots at $400 each, first come first served. The money will benefit the New York City Ballet, where Parker is a board member. (AP Photo/Kamran Jebreili, File)

Airbnb is launching local tours and other experiences in New York City this week, with one listing promising “an unforgettable shoe-shopping experience” led by a New Yorker whose bio describes her as “an actor, producer, businesswoman … and a proud New Yorker.”

That host is Sarah Jessica Parker. Each participant will get a pair of shoes from her SJP Collection at Bloomingdale’s, with a stop at the department store’s Forty Carrots cafe for frozen yogurt before the guests head off to the ballet.

The listing for Parker’s Oct. 6 experience will go live Tuesday morning, with four spaces bookable at $400 each, first come, first served. The money will go to the New York City Ballet, where Parker is a board member.

Parker said in a phone interview with The Associated Press that she gave a lot of thought to making sure that her tour “speaks to the very colorful identity that is New York. We could have gone to MOMA or the Whitney or walked through Chinatown or certainly had a nice walk on the High Line or just strolled the streets of the East Village or Midtown East.” She decided on Bloomingdale’s because it’s “an iconic destination” where she hopes to “be of service” in helping her guests pick out the perfect footwear.

The ballet, she added, is “one of the great cultural experiences anybody can have” in New York, whether they live here or are visiting.

Airbnb has been offering experiences in other cities since November as part of a larger “trips” platform. It’s now in 40 markets worldwide, including Barcelona, Havana and Tokyo. A handful of New York experiences have been listed since March, all in Harlem, but the trips rollout this week will expand to 150 experiences citywide, from “secrets of the subway” to a walk through New York’s “tattoo history.”

Prices for experiences in other markets range from under $10 to more than $100, depending on location and what’s offered. Hosts get 80 percent of the fee, Airbnb the rest, except for the social impact experiences, where 100 percent goes to charity.

Fans of the HBO series “Sex and the City,” which Parker starred in, still seek out places around New York where the show was filmed. “There’s so much of the city that I recall from the many years of shooting on the streets,” Parker said. Did she consider taking guests on her Airbnb tour to Magnolia Bakery in Greenwich Village, where a famous cupcake-eating scene was shot? “You know what,” she said with a laugh, “it didn’t even occur to me.”

Airbnb is primarily known for vacation rentals around the world. Officials in many cities have criticized the company, saying its short-term rentals are reducing long-term housing options for residents and forcing prices up.