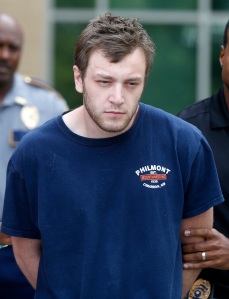 Kenneth James Gleason is escorted by police to a waiting police car in Baton Rouge, La., Tuesday, Sept. 19, 2017. Gleason is charged with two counts of first degree murder and other charges, for three shootings in the Baton Rouge area throughout the past week that resulted in the death of two men. (AP Photo/Gerald Herbert)

BATON ROUGE, La. (AP) — A 23-year-old white man was arrested Tuesday and accused of cold-bloodedly killing two black men and shooting up a black family’s home in a string of attacks last week that police say may have been racially motivated.

A law enforcement official said authorities found a handwritten copy of an Adolf Hitler speech at Kenneth James Gleason’s home, and investigators said surveillance footage and DNA on a shell casing link him to the crimes.

Authorities said he would be charged with first-degree murder in the shooting deaths of a homeless man and a dishwasher who was walking to work. In each case, the killer opened fire from his car, then walked up to the victim as he lay on the ground and fired again repeatedly, police said.

“I feel confident that this killer would have killed again,” interim Police Chief Jonny Dunnam said.

Authorities found the Hitler speech during a search over the weekend, according to the law enforcement official, who spoke on condition of anonymity because the investigation was still going on.

Asked whether police suspect the shootings were motivated by race, Sgt. L’Jean McKneely said: “We’re not completely closed off to that. We’re looking at all possibilities at this time, so we’re not going to just pinpoint that.”

“It appears to be cold, calculated, planned (against) people who were unarmed and defenseless,” he said.

Authorities also said that just after midnight on Sept. 10, Gleason fired into the home of a black family who lived three houses down from Gleason and his parents.

Resident Tonya Stephens said her two adult sons were home at the time and she was away at her nurse’s job. Three bullets pierced the front door and struck furniture, but no one was hurt.

Stephens said her family had seen Gleason sleeping in his car or speeding down the street, but she never had any dealings with him and “I never paid him any mind.”

In the other shootings, neither victim had any connection to Gleason, investigators said.

The first killing occurred Sept. 12, when 59-year-old Bruce Cofield, who was homeless, was gunned down. The second took place last Thursday night, when 49-year-old Donald Smart was shot on his way to his job at a cafe popular with Louisiana State University students.

Authorities said ballistics tests determined that the same gun was used in all three shootings. Also, they said DNA found on one of the shell casings matched genetic material on a swab they took from Gleason.

Investigators have not found the 9 mm gun but said Gleason bought such a weapon last November, according to the district attorney. Gleason also ordered a silencer in July, but it had not arrived yet — “thankfully,” the prosecutor said.

One of the big breaks in the case came when a security company noticed a white man in a red car removing his license plate and perhaps putting a gun in the trunk while parked at the company’s office.

The company reported the suspicious activity to police and followed up with them after the second shooting, giving authorities surveillance video and photographs. Investigators found Gleason’s red car on Saturday.

Louisiana’s capital city is in the grips of a surge in bloodshed. The number of homicides in East Baton Rouge Parish has already surpassed last year’s total of 62, The Advocate newspaper reported this month.

“Baton Rouge has been through a lot of turmoil in the last year,” the police chief said. If not for Gleason’s arrest, “he could have potentially created a tear in the fabric that holds this community together.”

Racial tensions escalated in the city in the summer of 2016 when a black man was shot to death by a white police officer outside a convenience store. About two weeks later, a black gunman targeted police in an ambush, killing three officers and wounding three others before he was shot to death.

Gleason did not appear to have any active social media profiles. A Louisiana State University spokesman said Gleason attended the school from the fall of 2012 to fall of 2013. He had transferred to LSU from Baton Rouge Community College.

Gleason was arrested in Phoenix in December on charges of shoplifting wine and razors. Police said he was homeless at the time. The case was dismissed after he completed a diversion program.

During the search of Gleason’s home, authorities also found 9 grams of marijuana and vials of human growth hormone, according to police.