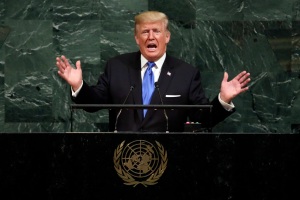 NEW YORK (AP) — President Donald Trump says achieving peace between the Israelis and Palestinians may be the “toughest deal of all” he’s tried to negotiate.

Trump says his administration nonetheless is working “very hard” for peace in the region. He says there’s a “pretty good shot” it can be achieved.

Abbas says a peace agreement would be the “deal of the century.”

Trump met in New York earlier in the week with Israeli Prime Minister Benjamin Netanyahu. At that meeting, Trump said a peace deal would be a “fantastic achievement” and that “we are giving it an absolute go.”