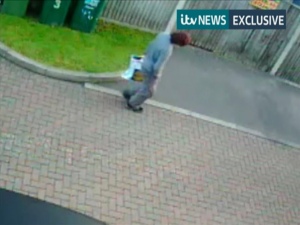 This image made from CCTV video obtained by ITN on Sunday Sept. 17, 2017, shows what they say is a person leaving the property in Sunbury, England, on Friday, which was raided in connection with the subway bombing in London. British broadcaster ITN have released CCTV footage of what they say shows a person leaving the property in Sunbury-on-Thames where police carried out a raid in connection with Friday’s bombing in London. (ITN via AP)

LONDON (AP) — The Latest on the London subway blast investigation (all times local):

A local official and media reports in Britain say the two suspects arrested over last week’s London subway bombing are an 18-year-old refugee from Iraq and a 21-year old believed to be from Syria, both of whom were fostered by a British couple.

The 18-year-old was detained Saturday at the port of Dover. The 21-year-old was held later the same day in Hounslow, west London.

Police are searching three addresses, including the suburban home of Penelope and Ronald Jones, who have served as foster parents for more than 200 children.

Local council chief Ian Harvey says he believes the 18-year-old is an Iraqi orphan who moved to the U.K. when he was 15. He says the 21-year-old was also a former foster child of the Joneses.

British police are still holding two suspects in custody over the London subway blast as commuters head to work Monday in the first morning rush hour since the attack.

Authorities have reduced the terror threat level from “critical” to “severe,” meaning they no longer believe another attack is imminent. But officials said the public would continue to see an increased police presence around London.

Meanwhile, closed-circuit television images, acquired by ITV News and broadcast Sunday, appeared to show a person walking with a Lidl shopping bag in a suburb before Friday morning’s attack at Parsons Green station that injured 30 people.

Images posted on social media following the attack appeared to show wires protruding from a flaming bucket contained in a Lidl bag on the floor of the train carriage.