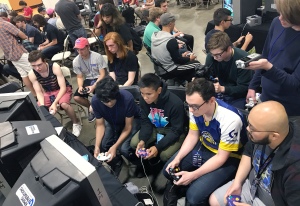 In this Aug. 25, 2017, photo, Connor Nguyen, at right, and Griffin Williams, second from right, compete in a “Super Smash Bros. Melee” tournament at the Shine eSports festival at the Seaport World Trade Center in Boston. Griffin, 21, is captain of an esports team at the University of California, Irvine, and Nguyen, 23, is a graduate of the school. The University of California, Irvine, is among a growing number of U.S. schools starting to offer scholarships to students who compete in esports, competitive video-game playing. (AP Photo/Collin Binkley)

BOSTON (AP) — In some ways, they’re like typical college athletes. They’re on varsity teams. They train for hours between classes. Some get hefty scholarships. But instead of playing sports, they’re playing video games.

On college campuses, varsity gaming teams with all the trappings of sports teams are becoming increasingly common as schools tap into the rising popularity of competitive gaming. After initially keeping its distance, even the NCAA is now considering whether it should play a role.

Fifty U.S. colleges have established varsity gaming teams over the past three years, often offering at least partial scholarships and backed by coaches and game analysts, much like any other college team.

“We’re talking to at least three or four new schools every single day. We did not expect this type of reaction,” said Michael Brooks, executive director of the National Association of Collegiate eSports, a group that represents more than 40 schools with varsity gaming teams. “It caught us a little off guard.”

Competitive gaming, often called esports, has become a booming entertainment industry over the past decade, with flashy professional events that fill sports arenas and draw millions of online viewers.

The biggest tournaments offer prize pools upward of $20 million, attracting elite gamers who wage battle in popular video games such as “League of Legends” and “Overwatch.”

Until recently, most colleges were slow to meet demand for a collegiate version, experts say, but interest has come in a flurry over the past year as more schools see a chance to benefit from the industry’s growth.

Smaller private schools in particular have been quick to create varsity programs as a way to boost enrollment numbers, although so far it has brought mixed results. Among several starting new teams this year is the College of St. Joseph, a school of about 260 students in Vermont.

“Strategically, we knew that it would give us more cache with students,” said Jeff Brown, the school’s senior vice president and athletic director. “We’re all looking for a way to bring more kids in.”

Many colleges hope to replicate the success they’ve seen at Robert Morris University in Illinois, a small school that launched the country’s first varsity team in 2014 and has since become a national powerhouse.

But it’s also catching on at some bigger schools, including the University of Utah, which says its new varsity teams are the first at any school in the five major athletics conferences.

Although most collegiate tournaments are now organized by third-party gaming leagues or video-game companies, the rapid expansion has caught the attention of the NCAA. The league’s board of governors announced in August that it will discuss its “potential role” in esports at an October meeting, noting the “prevalence of organized gaming competitions” on college campuses.

Supporters of collegiate gaming say varsity teams can bring national exposure to colleges at a relatively low cost, with the potential to land sponsorships that bring costs even lower.

The University of California, Irvine, opened a new $250,000 “eSports arena” last year with financial backing from sponsors including a computer company and Riot Games, a video-game maker that organizes collegiate tournaments.

“Compared to traditional sports programs, it’s more affordable,” said Brooks, of the collegiate esports association. “At the end of day all we’re talking about is a souped-up computer lab.”

Students who represent their schools say it teaches them lessons in strategy, teamwork and time management, and it offers camaraderie with other gamers on campus.

“It really builds a sense of community,” said Griffin Williams, a senior at UC Irvine who captains a team for the game “Super Smash Bros. Melee.” ”I actually feel more school pride than I would have had otherwise.”

Other schools have brought esports into the classroom as students pursue careers in the business side of gaming. Boston’s Emerson College is offering a new course on esports this year and eventually hopes to offer a minor degree.

“It’s becoming a vast piece of everybody’s world,” said Gregory Payne, the head of communication studies at Emerson. “We have to be open to what new generations are dealing with.”

Still, some have been reluctant to embrace what is sometimes seen as a slacker’s pastime. Administrators on many campuses leave gamers to compete through unofficial clubs rather than varsity teams.

But that hasn’t stopped others who expect collegiate gaming to keep growing. After announcing its first varsity team in April, Utah has already added teams for three more games and eventually hopes to offer full scholarships to gamers.

At the College of St. Joseph, Brown said demand for the school’s two new teams is already overflowing. By next year, he expects the school to add several more.

“We’re getting a tremendous amount of interest,” he said. “Nearly every kid on campus wants to be a part of this.”