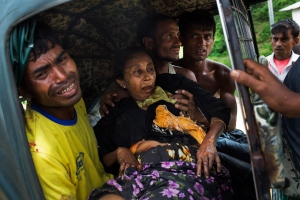 An injured elderly woman and her relatives rush to a hospital on an autorickshaw, near the border town of Kutupalong, Bangladesh, Monday, Sept. 4, 2017. The Rohingya woman encountered a landmine that blew off the right leg while trying to cross into Bangladesh. (AP Photo/Bernat Armangue)

Refugee accounts of the latest spasm of violence in Rakhine have typically described shootings by soldiers and arson attacks on villages. But there several cases that point to anti-personnel land mines or other explosives as the cause of injuries on the border with Bangladesh, where 300,000 Rohingya have fled in the past two weeks.

AP reporters on the Bangladesh side of the border on Monday saw an elderly woman with devastating leg wounds: one leg with the calf apparently blown off and the other also badly injured. Relatives said she had stepped on a land mine.

Myanmar has one of the few militaries, along with North Korea and Syria, which has openly used anti-personnel land mines in recent years, according to Amnesty. An international treaty in 1997 outlawed the use of the weapons; Bangladesh signed it but Myanmar has not.

Lt. Col. S.M. Ariful Islam, commanding officer of the Bangladesh border guard in Teknaf, said on Friday he was aware of at least three Rohingya injured in explosions.

Bangladeshi officials and Amnesty researchers believe new explosives have been recently planted, including one that the rights group said blew off a Bangladeshi farmer’s leg and another that wounded a Rohingya man. Both incidents occurred Sunday. It said at least three people including two children were injured in the past week.

“It may not be land mines, but I know there have been isolated cases of Myanmar soldiers planting explosives three to four days ago,” Ariful said Friday.

Amnesty said that based on interviews with eyewitnesses and analysis by its own weapons experts, it believes there is “targeted use of land mines” along a narrow stretch of the northwestern border of Rakhine state that is a crossing point for fleeing Rohingya.

“All indications point to the Myanmar security forces deliberately targeting locations that Rohingya refugees use as crossing points,” Amnesty official Tirana Hassan said in a statement Sunday. She called it “a cruel and callous way of adding to the misery of people fleeing a systematic campaign of persecution.”

The violence and exodus began on Aug. 25 when Rohingya insurgents attacked Myanmar police and paramilitary posts in what they said was an effort to protect their ethnic minority from persecution by security forces in the majority Buddhist country.

In response, the military unleashed what it called “clearance operations” to root out the insurgents. Accounts from refugees show the Myanmar military is also targeting civilians with shootings and wholesale burning of Rohingya villages in an apparent attempt to purge Rakhine state of Muslims.

Bloody anti-Muslim rioting that erupted in 2012 in Rakhine state forced more than 100,000 Rohingya into displacement camps in Bangladesh, where many still live today.

Rohingya have faced decades of discrimination and persecution in Myanmar and are denied citizenship despite centuries-olds roots in the Rakhine region. Myanmar denies Rohingya exist as an ethnic group and says those living in Rakhine are illegal migrants from Bangladesh.