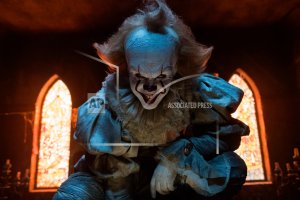 LOS ANGELES (AP) — ‘It’ is a hit.
The Stephen King adaptation from New Line and Warner Bros. shattered records over the weekend earning $117.2 million from 4,103 locations according to studio estimates on Sunday.
Not only is “It” now the largest ever opening for a horror movie and the largest September opening of all time, the film more than doubled the earnings of the previous record holders. Before this weekend “Paranormal Activity 3” had the biggest horror opening with $52.6 million from 2011, and the highest September debut was “Hotel Transylvania 2’s” $48.5 million in 2015.
“We blew past everyone’s most optimistic and aggressive projections and I think there might be room for us to grow this weekend even still,” said Jeff Goldstein, Warner Bros. president of domestic distribution.
Goldstein said he was conservative with Sunday projections due to the confounding factors of the film’s R-rating, the popularity of late night showings, the beginning of football season and Hurricane Irma.
Regardless of whether there is an uptick when final numbers are reported Monday, “It’s” success is still astounding, especially considering that the project from director Andy Muschietti cost only $35 million to produce.
Critics and audiences were on the same page, too. The film has a fresh 86-percent Rotten Tomatoes score, and audiences, who were 65 percent over age 25, gave “It” a B+ CinemaScore.
Starring Bill Skarsgard as the homicidal clown Pennywise, “It” is the first of a planned two-part series. The second is slated to come out in the third quarter of 2019.
“It starts with a brilliant story from Stephen King,” Goldstein said of the stellar performance. “The director made a fabulously compelling movie, our marketing just nailed it and the date was special.”
Indeed, the date proved key. With no discernable competition, save for the counter programmed opening of the Reese Witherspoon romantic comedy “Home Again,” which came in a very distant second with $9 million, “It” was able to dominate screens and show times at major movie theaters.
“I don’t think anyone could have imagined an opening over $100 million for this movie,” comScore senior media analyst Paul Dergarabedian said. “Suddenly September is on the map with its first $100 million debut. Every month of the year is a potential hit-maker and this is really good news for an industry that for the last six weeks has been in the doldrums.”
“It” is just the latest example of a film that defies old box office logic about which timeframes work for tent-pole movies. Before “Star Wars: The Force Awakens,” no December movie had ever opened over $100 million, for instance, and the same went for the month of February until “Deadpool” proved that to be antiquated thinking as well.
The success of “It” also comes after an underperforming summer movie going season that left the year to date box office down 6.5 percent from last year. Now, with the “It” factor, the year is down only 5.5 percent
“There has been a lot written about the demise of the box office. This seems to come up every few years and it’s all content driven. If there are good movies that are out there in the marketplace, the public will embrace them and be excited to see them. If we come up with movies they are not interested in, they stay away,” Goldstein said. “This is a movie they wanted to see.”
The overwhelming dominance of “It” made the rest of the charts look downright anemic. In third place was “The Hitman’s Bodyguard,” with $4.9 million, “Annabelle: Creation” took fourth with $4 million, and “Wind River” rounded out the top five with $3.2 million.
But a monster hit like “It” does have the potential to affect the box office on the whole, potentially spurring movie going momentum.
“It’s a cyclical business. One day it’s Chicken Little and the next it’s bright sunny days ahead,” Dergarabedian said. “September will be the August we wish we had. We could be looking at a record-breaking month after an abysmal summer.”
Next week, Paramount debuts Darren Aronofsky’s psychological horror “mother!” starring Jennifer Lawrence, which could benefit from the glow of “It,” or get dragged into the sewer with the rest of the competition.
Estimated ticket sales for Friday through Sunday at U.S. and Canadian theaters, according to comScore. Where available, the latest international numbers for Friday through Sunday are also included. Final domestic figures will be released Monday.
1. “It,” $117.2 million ($62 million international).
2.”Home Again,” $9 million ($955,000 international).
3.”The Hitman’s Bodyguard,” $4.9 million ($7.9 million international).
4.”Annabelle: Creation,” $4 million ($8.6 million international).
5.”Wind River,” $3.2 million ($1.2 million international).
6.”Leap!” $2.5 million.
7.”Spider-Man: Homecoming,” $2 million ($71.8 million international).
8.”Dunkirk,” $2 million ($13.5 million international).
9.”Logan Lucky,” $1.8 million ($1.7 million international).
10.”The Emoji Movie,” $1.1 million ($5.7 million international).
___
Estimated ticket sales for Friday through Sunday at international theaters (excluding the U.S. and Canada), according to comScore:
1. “Spider-Man: Homecoming,” $71.8 million.
2. “It,” $62 million.
3. “Dunkirk,” $13.5 million.
4. “Annabelle: Creation,” $8.6 million.
5. “American Made,” $8.1 million.
6. “The Hitman’s Bodyguard,” $7.9 million.
7. “Memoir of a Murder,” $7.4 million.
8. “Despicable Me 3,” $6.2 million.
9. “The Emoji Movie,” $5.7 million.
10. “A Silent Voice,” $5 million.
___
Universal and Focus are owned by NBC Universal, a unit of Comcast Corp.; Sony, Columbia, Sony Screen Gems and Sony Pictures Classics are units of Sony Corp.; Paramount is owned by Viacom Inc.; Disney, Pixar and Marvel are owned by The Walt Disney Co.; Miramax is owned by Filmyard Holdings LLC; 20th Century Fox and Fox Searchlight are owned by 21st Century Fox; Warner Bros. and New Line are units of Time Warner Inc.; MGM is owned by a group of former creditors including Highland Capital, Anchorage Advisors and Carl Icahn; Lionsgate is owned by Lions Gate Entertainment Corp.; IFC is owned by AMC Networks Inc.; Rogue is owned by Relativity Media LLC.