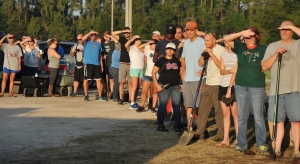 MIAMI (AP) — The Latest on Hurricane Irma (all times local):

All five living former U.S. presidents have issued a joint “One America Appeal” for donations to support the staggering recovery needs from Hurricane Harvey. Now that Hurricane Irma has damaged Puerto Rico and is closing in on Florida, the presidents are expanding the appeal to help its victims as well.

The appeal launched with a public service announcement focused on “Our Friends in Texas” during tonight’s NFL season opener on NBC, but a second PSA addressing both hurricanes is launching this weekend, and a website for tax-deductible donations related to both storms is now live at OneAmericaAppeal.org.

A special restricted account has been established through the George H. W. Bush Presidential Library Foundation to collect and quickly distribute donations to ensure 100 cents out of every dollar goes to assist hurricane victims. The Carter Center says Harvey has displaced more than one million people and caused an estimated $180 billion in damage over its 300-mile path of destruction.

Some forecasters have predicted that Irma’s economic toll could be even greater.

For an entire generation in South Florida, Hurricane Andrew was the definition of a monster storm.

For the people who led victims through that devastating aftermath, Hurricane Irma is looking far worse by nearly every measure.

Weather Channel senior hurricane specialist Bryan Norcross was a local television meteorologist hailed as a hero back then. He says Irma’s impact on Florida will be much greater — “an entirely different level of phenomenon.”

Kate Hale grabbed attention as Miami-Dade’s emergency management chief by saying “where the hell is the cavalry” after Andrew laid waste to half the county. She says nobody could make up a worse scenario than Irma right now. Combined with flooding from Hurricane Harvey and wildfires out west, she says the effect on the nation’s economy is “potentially staggering.”

President Donald Trump is urging people to “be safe” as Hurricane Irma approaches.

On Twitter Friday, Trump wrote, “Hurricane Irma is of epic proportion, perhaps bigger than we have ever seen. Be safe and get out of its way, if possible.”

Trump added that the federal government is ready, and in another tweet, he said: “Our incredible U.S. Coast Guard saved more than 15,000 lives last week with Harvey. Irma could be even tougher. We love our Coast Guard!”

Coastal residents around South Florida have been ordered to evacuate as the killer storm closes in on the peninsula for what could be a catastrophic blow this weekend.

The Miami Marlins are in Atlanta for the start of a weeklong road trip with Hurricane Irma very much on their minds. They arrived on a chartered flight crowded with the families of players and staff. That helped ease some immediate concerns, but they couldn’t ignore what’s going on back in Miami, where highways are jammed as coastal residents face mandatory evacuations.

Miami Manager Don Mattingly says the team is still watching what happened with Harvey, and now worrying that Irma could devastate their hometown.

The National Hurricane Center says Hurricane Irma weakened a bit more but remains a powerful threat to Florida with storm surges that could reach 10 feet in some places.

Irma’s winds dropped to 150 mph, still a Category 4 dangerous storm, as it moves between Cuba and the Bahamas over warmer than normal waters that can intensify tropical storms. Irma’s core should hit Florida early Sunday morning, but its tropical force storm winds can arrive as early as Saturday morning.

The hurricane center is projecting storm surge on top of normal tides of 5 to 10 feet all the way from Jupiter Inlet, which is north of Palm Beach on Florida’s east coast, around to Bonita Beach, which is on Florida’s west coast south of Fort Myers. The Florida Keys will likely be swamped. From Bonita Beach north to Venice, storm surge is expected to be 3 to 5 feet. And from Jupiter Inlet north to Sebastian Inlet, which is just south of Cape Canaveral, it is expected to be 3 to 6 feet.

Forecasters say this life-threatening surge will be accompanied by large and destructive waves.

Federal Emergency Management Agency chief Brock Long offered some advice for people in the path of Hurricane Irma who’ve been ordered to evacuate: Get out now.

Speaking at FEMA headquarters in Washington on Friday, Long said no one in Florida has experienced a storm with the intensity of what’s now bearing down on the state. He said there is “a lot of certainty in this forecast” showing Irma making landfall somewhere in Florida this weekend, and the winds and storm surge from the storm will be devastating.

Long said those in low-lying areas who’ve been told to evacuate “need to get out and heed the warning.”

More than 8,000 FEMA staff have been deployed to prepare for Irma and help with the continuing recovery effort from Hurricane Harvey, which caused massive flooding in southeastern Texas last week.

Collomb told reporters Friday that the casualty toll could rise as more emergency workers reach deeper into the area.

He said France is shuttling security forces, emergency workers and aid to the islands before Hurricane Jose hits St. Martin and St. Barts on Saturday night. He said the top priority is to “save the population and restore order” after looting broke out in some areas.

The French rescue operation includes military frigates, military and civilian planes and helicopters. A warship is leaving from France next Tuesday to bring heavy equipment to help rebuild the islands, where the government says a majority of buildings were damaged or destroyed.

Dutch King Willem-Alexander will fly to the Caribbean island of Curacao on Sunday to inspect the coordination of relief efforts for devastated former colony St. Maarten in the aftermath of Hurricane Irma, which hit as a Category 5 storm.

The Royal House announced the visit Friday, saying the monarch will assess in Curacao “whether and when it is possible to visit St. Maarten” and nearby Dutch islands Saba and St. Eustatius, which were less severely damaged by Irma’s winds.

A headquarters in Curacao is helping coordinate a military operation to deliver supplies to the 40,000-strong population of St. Maarten. The tiny country, which shares an island with the French territory of St. Martin, has been autonomous since 2010, but remains part of the Dutch commonwealth.

Prime Minister Mark Rutte says that most people are surviving on the island without the basic necessities of life. Power, running water and most communications were knocked out by the powerful storm and looting has been reported by local authorities struggling to keep control of the island.

Dutch military forces are helping maintain order and distributing aid to the shattered former colony of St. Maarten after clearing the runway at the capital’s badly damaged airport and securing berths in the harbor for two navy ships to bring ashore supplies.

Prime Minister Mark Rutte told reporters Friday that the first plane already has landed at the airport in the capital, Philipsburg, and navy vessels have unloaded vital supplies in a race against time before the next storm arrives.

Hurricane Jose is forecast to pass through the region Saturday, but Rutte says it’s not expected – at the moment – to directly hit St. Maarten as Irma did Wednesday and winds will likely be significantly weaker.

Rutte and Interior Minister Ronald Plasterk say troops are helping stretched local authorities on the autonomous territory to uphold law and order amid looting of stores. St. Maarten is the Dutch side of St. Martin, an island split between Dutch and French control.

France’s government is reporting looting of televisions and other goods on the Caribbean island of St. Martin after it was hammered by Hurricane Irma, as warships and military planes ferry police and rescue crews to the site.

Annick Girardin, minister for France’s overseas territories, described on BFM television Friday “scenes of pillaging” of televisions as well as food and water.

She lamented “how people can take advantage of the distress of others” and said it’s essential for police to restore order and ensure urgent care for victims. The French government says four people are confirmed dead and about 50 injured on the French side of St. Martin. Another death was reported on the Dutch side of the shared island.

French military spokesman Col. Patrik Steiger told The Associated Press two French frigates are expected to arrive on St. Martin on Friday and military transport planes and helicopters are bringing in personnel and aid to the local population from the nearby French island of Guadeloupe.

Hurricane Irma has weakened to a Category 4 storm Friday as it batters the Caribbean on a path toward Florida but remains a powerful hurricane.

The U.S. National Hurricane Center says Irma’s maximum sustained winds have decreased to near 155 mph (250 kph). The hurricane center says some fluctuations in strength are likely over the next day or two but Irma is expected to stay a Category 4 storm.

Just before 5 a.m. EDT Friday, the hurricane was centered about 55 miles (90 kilometers) northwest of Great Inagua Island and 495 miles (795 kilometers) southeast of Miami.

Hurricane Irma battered the Turks and Caicos Islands early Friday as the fearsome Category 5 storm continued a rampage through the Caribbean that has killed at least 11 people, with Florida in its sights.

Waves as high as 20 feet (6 meters) are expected in the Turks and Caicos. Communications went down as the storm slammed into the islands, and the extent of the devastation was unclear.

The first hurricane warnings were issued for parts of southern Florida as the state braced for what could be a catastrophic hit over the weekend. Following in Irma’s wake was Hurricane Jose, with some of the islands hit hardest by Irma in its expected path.

HURRICANE NEWSLETTER – Get the best of the AP’s all-formats reporting on Irma and Harvey in your inbox: http://apne.ws/ahYQGtb