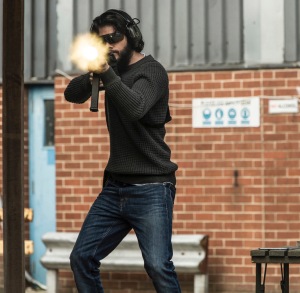 This image released by CBS Films shows Dylan O’Brien as Mitch Rapp in a scene from “American Assassin,” based on the spy novel from the late Vince Flynn. (Christian Black/CBS Films and Lionsgate via AP)

MINNEAPOLIS (AP) — After twists and turns worthy of the very spy series it sprung from, a movie featuring the indomitable fictional terrorism fighter Mitch Rapp is about to hit movie screens nationwide — four years after his creator, author Vince Flynn, died from prostate cancer.

“American Assassin ,” the first movie based on a Flynn best-seller, premieres Sept. 15, featuring Dylan O’Brien (“The Maze Runner”) as Rapp and Michael Keaton as his weathered mentor, Stan Hurley, on a mission to avert nuclear war in the Middle East.

Getting Rapp to the big screen has been a decade-long odyssey, said “American Assassin” producer Lorenzo di Bonaventura, a fan of the series who got to know Flynn before his death in 2013.

“When Vince died we redoubled our efforts to get this made. I owed him that,” said di Bonaventura, who produced the Transformers movies.

Flynn, a native of St. Paul, wrote 14 political thrillers, starting with his self-published “Term Limits” in 1997, and featured his CIA counterterrorism operative Rapp in 13. His books have sold nearly 20 million copies in the U.S. and millions more worldwide, and include former Presidents Bill Clinton and George W. Bush among fans.

But making a Mitch Rapp movie proved elusive. Originally Flynn’s novel “Consent to Kill” was considered, then put aside. “Training Day” director Antoine Fuqua originally was attached to direct “American Assassin,” but moved on to direct “Olympus Has Fallen.” Chris Hemsworth passed on the lead role because of scheduling issues, and Bruce Willis was interested in playing Hurley but no deal was made.

Producers had to get cameras rolling before the film rights reverted to Flynn’s estate, di Bonaventura said.

“We weren’t at an urgent level but we were approaching them,” he said. Filmmakers also had to wait while O’Brien recovered from an injury suffered during an accident while filming a “Maze Runner” sequel in 2016. Finally the 55-day shoot began last September and jumped from London to Rome and Malta before finishing in Thailand.

Changes were made to the plot of the film. Instead of having Rapp out for vengeance after his girlfriend is killed in the 1988 Lockerbie bombing, the movie moves the action to present day with Rapp’s fiancee slain in a terrorist beach massacre in Spain. That creates an origin story and places Rapp, who is 23 in the story, closer in age to the 26-year-old O’Brien.

“We were not making a period piece,” said co-screenwriter Stephen Schiff, who said he came up with the beach massacre opening. “That seems like no way to launch a franchise.”

Eighteen months after the beach murder, Rapp is recruited by a CIA leader played by Sanaa Lathan for intense training by Hurley and given a mission to stop a former Hurley protege known as Ghost (played by Taylor Kitsch) from starting a world war. (In a nod to Rapp’s creator, a battleship in the film’s thrilling climax was named Flynn).

Director Michael Cuesta, whose credits include the movie “Kill the Messenger” and the Showtime series “Homeland,” was quick to praise his star. “I think Dylan brought an innocence and a boyishness, boy-next-door quality to the character,” he said. “Dylan doesn’t look like your typical assassin.”

O’Brien said he was taken with the story of Rapp’s journey from young man — “a wounded human” — to assassin.

“I thought that was a really fresh concept,” said O’Brien, who is making his own transition from the teen roles of “The Maze Runner” and TV’s “Teen Wolf.” O’Brien did about eight weeks of training, going to a gym with his trainer every day and learning different martial arts.

CBS Films’ “American Assassin,” distributed by Lionsgate, cost about $50 million, modest by action movie standards. Producers hope to carve out their own share of the market when the movie opens the weekend after Stephen King’s killer clown movie “It” and before the sequel to the hit spy satire “Kingsman.”

And the Mitch Rapp series continues after Flynn’s death. Writer Kyle Mills has continued the book series — “Enemy of the State,” his third installment, was released Sept. 5 — and Mills has signed on for another three books.

“These books are very patriotic and they’re violent and they’re ripped from the headlines,” said Emily Bestler, Flynn’s longtime editor at Atria Books. Doubters early on thought there would not be a movie audience for such flag-waving fare, Bestler said, “but we knew there would be.”

“If you read the papers, you’re not sure we’re winning,” Bestler said. “You sit down with one of these books and we win, and it feels really, really good.”

Producers hope “American Assassin” leads to a Mitch Rapp franchise (“Kill Shot,” the next book in the series, is being considered for a sequel), and the publisher has released paperback tie-ins to the movie.

“I would love for this movie to be a part of bringing a whole new generation of Mitch Rapp fans into bookstores and movie theaters,” Bestler said.

Flynn’s widow, Lysa Flynn, said she is glad the producers never gave up.

“This is a happy time. It’s just such an honor to see the movie finally happening,” she said, adding that Vince Flynn will “always live on in his books. It’s like having him back for a time.”