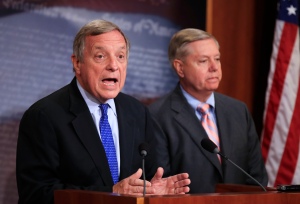 WASHINGTON (AP) — The Latest on Congress and DACA (all times local):

Sen. Lindsey Graham says he believes “there’s a congressional deal to be made” that could resolve the question of a legal shield for young immigrants living in the U.S. illegally while improving border security without building a wall.

Graham says in a nationally broadcast interview that lawmakers could restore a “Dream Act” for the young while also enhancing border security — without constructing the 2,200-mile wall (3540.39-kilometers) that President Donald Trump has advocated since his campaign for the White House.

But Graham also tells MSNBC’s “Morning Joe” show Congress needs “to define what an acceptable ‘Dream Act’ would look like.”

The South Carolina Republican, who is working on a bill with Sen. Dick Durbin, D-Ill., says he thinks Trump should turn to White House chief of staff John Kelly, who previously headed the Department of Homeland Security, for advice on border issues.

President Donald Trump’s announcement on immigration has Congress staring down an election-year deadline on an issue that bitterly divides the president’s own party, and that has painfully eluded lawmakers time and again.

Four years after comprehensive immigration legislation passed the Senate only to die in the House, Trump tossed to Congress the question of what to do with almost 800,000 young immigrants who were brought to the U.S. illegally as children. His attorney general, Jeff Sessions, announced that the administration will begin dismantling protections these immigrants were granted by former President Barack Obama, and the program will end unless Congress acts first.

What will actually happen in six months absent congressional action remained unclear. Trump himself took some of the sting from his threats with a tweet issued late Tuesday, after a day of turmoil and debate, declaring that if Congress can’t act to “legalize” the Deferred Action for Childhood Arrivals program, or DACA, “I will revisit this issue!”