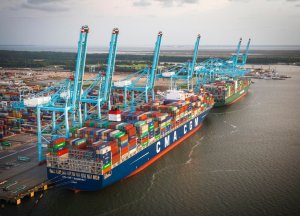 NORFOLK, Va. (AP) — The largest container ship ever to reach the U.S. has docked in Virginia.

The French-owned CMA CGM Theodore Roosevelt arrived in Norfolk on Monday from Asia after setting another record as the largest ship ever to traverse the newly expanded Panama Canal.

At 1,200-feet, the vessel is longer than the new USS Gerald R. Ford aircraft carrier, and can carry the equivalent of 14,400 20-foot-long cargo containers. That’s nearly 10 percent more than the COSCO Development, a huge ship that broke the previous record in May.

The Port of Virginia is one of only four East Coast ports with the 50 feet of depth at low tide desired for these massive ships. More are seeking funds to deepen their channels.