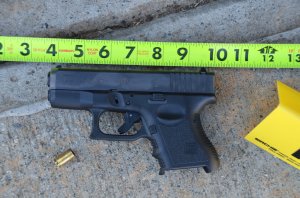 FILE – This Sunday, March 29, 2015, file photo provided by the Jefferson Police Department shows a gun involved in the accidental shooting of a 3-year-old in Jefferson, Ga. Shootings kill or injure at least 19 U.S. children each day, with boys, teenagers and blacks most at risk, according to a government study that paints a bleak portrait of persistent violence. The analysis of 2002-14 U.S. data that involves children and teens through age 17 was published Monday, June 19, 2017, in the journal Pediatrics. (Jefferson Police Department via AP, File)

CHICAGO (AP) — Shootings kill or injure at least 19 U.S. children each day, with boys, teenagers and blacks most at risk, according to a government study that paints a bleak portrait of persistent violence.

The analysis of 2002-14 U.S. data is billed as the most comprehensive study on the topic. While it mostly confirms previously released information, it underscores why researchers view gun violence as a public health crisis.

The report from the Centers for Disease Control and Prevention involves children and teens through age 17. It was compiled by analyzing death certificates and emergency room reports. Among the findings published Monday in the journal Pediatrics:

—The yearly toll is nearly 1,300 deaths and almost 6,000 nonfatal gunshot wounds — most of them intentional.

—Most deaths result from homicides and suicides, while assaults caused most of the nonfatal injuries.

—Suicides increased from 2007-14, from 325 to 532. The suicide rate increased 60 percent over those years to 1.6 per 100,000. One-third of these kids were depressed and most had experienced a recent crisis, including relationship breakups and problems at school.

—Most unintentional deaths resulted from playing with guns and unintentionally pulling the trigger. Most victims were bystanders although among kids up to age 10 in this group, more than 40 percent accidentally shot themselves.

The report notes that unintentional shooting deaths may be significantly underreported, which was highlighted in a report by The Associated Press and USA TODAY Network. The news organizations found during the first six months of 2016, minors died from accidental shootings — at their own hands, or at the hands of other children or adults — at a pace of one every other day, far more than limited federal statistics indicate.

Congress has prohibited the CDC from using federal money to advocate or promote gun control. CDC spokeswoman Courtney Lenard said the congressional directive “does not prohibit CDC from conducting public health research into gun violence” and the agency continues to do so.

An accompanying editorial in the journal said it’s “both reasonable and wise” for doctors to talk about firearms safety with parents, particularly those who keep guns at home.

“It may help to remind ourselves and our parents that our message on safe gun storage in homes with children is similar to that of gun rights and sport shooting groups,” wrote Dr. Eliot Nelson of University of Vermont Children’s Hospital.