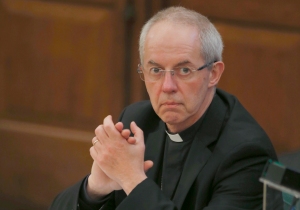 FILE – This is a Monday, Feb. 13, 2017 file photo of the Archbishop of Canterbury Justin Welby as he listens to debate at the General Synod in London. Welby the head of the Church of England said Thursday June 22, 2017 that the institution “colluded” with and helped to hide the long-term sexual abuse of young men by one of its former bishops. (AP Photo/Alastair Grant/File)

LONDON (AP) — The Church of England “colluded” with and helped to hide the long-term sexual abuse of young men by one of its former bishops, the head of the church said Thursday.

Archbishop of Canterbury Justin Welby apologized to the victims who had spoken out and helped to bring ex-bishop Peter Ball to justice as the church published a report that detailed how senior leaders did little about allegations against Ball over years and even appeared to cover up the case.

Welby ordered the independent report after Ball was convicted and imprisoned in 2015 for misconduct in public office and indecent assaults against teenagers and young men from the 1970s to 1990s. Ball, who admitted to abusing 18 young men, was released after serving 16 months.

Some victims reported that Ball, 85, encouraged them to engage in “spiritual exercises” involving naked praying and cold showers.

The report said Ball’s conduct “caused serious and enduring damage to the lives of many men,” but at the time the church trivialized it, partly because of a lack of understanding about safeguarding vulnerable adult men.

“The church, at its most senior levels and over many years, supported him unwisely and displayed little care for his victims,” it said.

Ball was arrested in 1992 for suspected indecent assault and given a police caution. He retired as bishop of Gloucester, but was allowed to continue work in churches and schools for years. He was not prosecuted until two decades later.

The report said George Carey, head of the Church of England at the time, believed Ball to be “basically innocent” and played a lead role in enabling Balls’ return to ministry.

Carey and other church leaders also appeared to try to cover up the problem when they failed to pass on letters that raised concerns about Ball to police, the report said.

Describing the report as “harrowing reading,” Welby said: “The church colluded and concealed rather than seeking to help those who were brave enough to come forward.”

“This is inexcusable and shocking behavior,” he said, adding that while most of what happened took place years ago “we can never be complacent, we must learn lessons.”

Vickery House, a retired Anglican priest who worked under Ball, was sentenced in 2015 to 6 ½ years in prison for sex attacks on teenagers and young men in the 1970s and ’80s.

Last year the church published a review that said senior clergymen were reportedly told of an unnamed priest’s alleged abuse of a young man, but the victim’s repeated attempts to get help and justice didn’t get anywhere.

The Anglican and Catholic churches are among institutions being investigated in a wide-ranging British probe into child sex abuse after it emerged that entertainers, clergy, senior politicians and others were implicated in decades-old abuse.